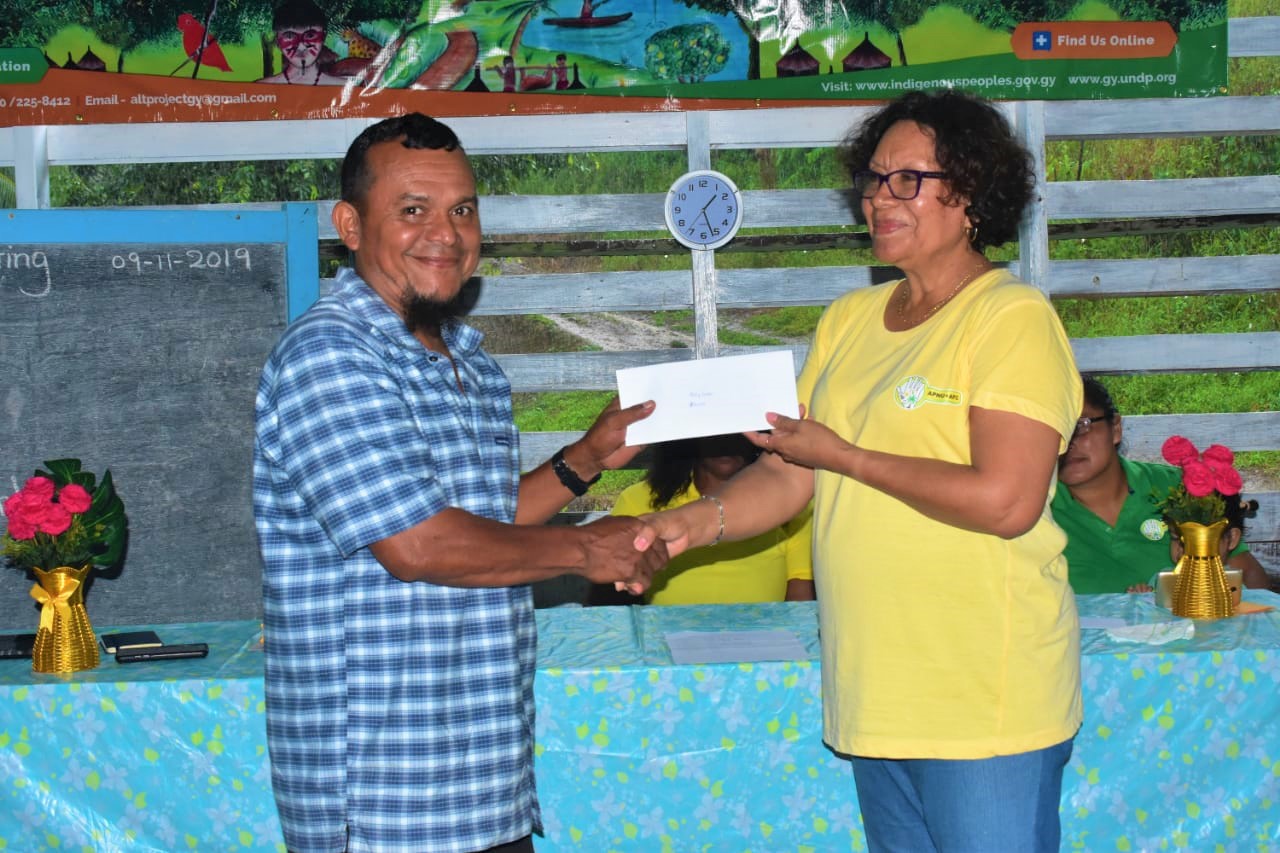 Twelve farmers from Santa Cruz who will be supplying the soon to be established Fruit Factory there received thirty thousand each to commence land clearing, preparation and planting.

This is in preparation to making the village which is located in Moruca sub-district, Barima/Waini, Region 1 become one of the most industrious Fruit Juice, Jelly and Marmalade producing village in Guyana.

The twelve farmers received the financial support from Minister within the Ministry of Indigenous Peoples’ Affairs Valerie Garrido-Lowe during a recent visit to the Region.

Before making the presentation, Minister Garrido-Lowe said “we are investing three million dollars in the first phase for twelve farmers so that they can plant fruit trees and build a processing factory and this will be your very own business.”

“Your Government believes in you as a person and as a village so we are going to help you and to support you and come next year, we will have more money for the processing factory because it will be done in three phases (a three year project) and we know you will excel because you are hardworking, strong and an enterprising people”, the Minister assured.

Minister Garrido-Lowe emphasized that the Government is focused on working together with the indigenous people all across Guyana since “for a long time, many, many years we have been the same way and that’s why we must be careful when we are choosing our leaders.”

“The President wants indigenous peoples to be respected by all,” Minister Garrido-Lowe assured residents and “we do not want progress to stop and our people must not be afraid but to continue to enjoy a better standard of living. There’s lots more to do and we have proven to you in four years what we can do just that, look at the Moruca bridge and lots of other projects we have done.”

Among the plantlets soon to be planted are cherry, orange, tangerine, lime, papaw, golden apple, guava, soursop, pineapple and banana.

It is estimate that the fruits will be ready to be harvested between eighteen months to three years by which time a factory will be constructed, furnished and fully operable.

Production will be done in keeping with international standards and during a visit to the village last October, Minister Garrido-Lowe underscored Government’s commitment to making available the necessary support needed to ensure the project is sustained, villagers are gainfully employed, physical and infrastructural development realized and the goal of ensuring food security achieved.

Santa Cruz is home to more than four hundred residents who are involved in farming and fishing as their main economic activities.

Meanwhile, scores of children who turned out to the meeting received toys for the holidays bringing the total number of toys distributed in Cabora, Mora, Kwebanna, Santa Cruz and 4 Miles to in excess of five hundred.