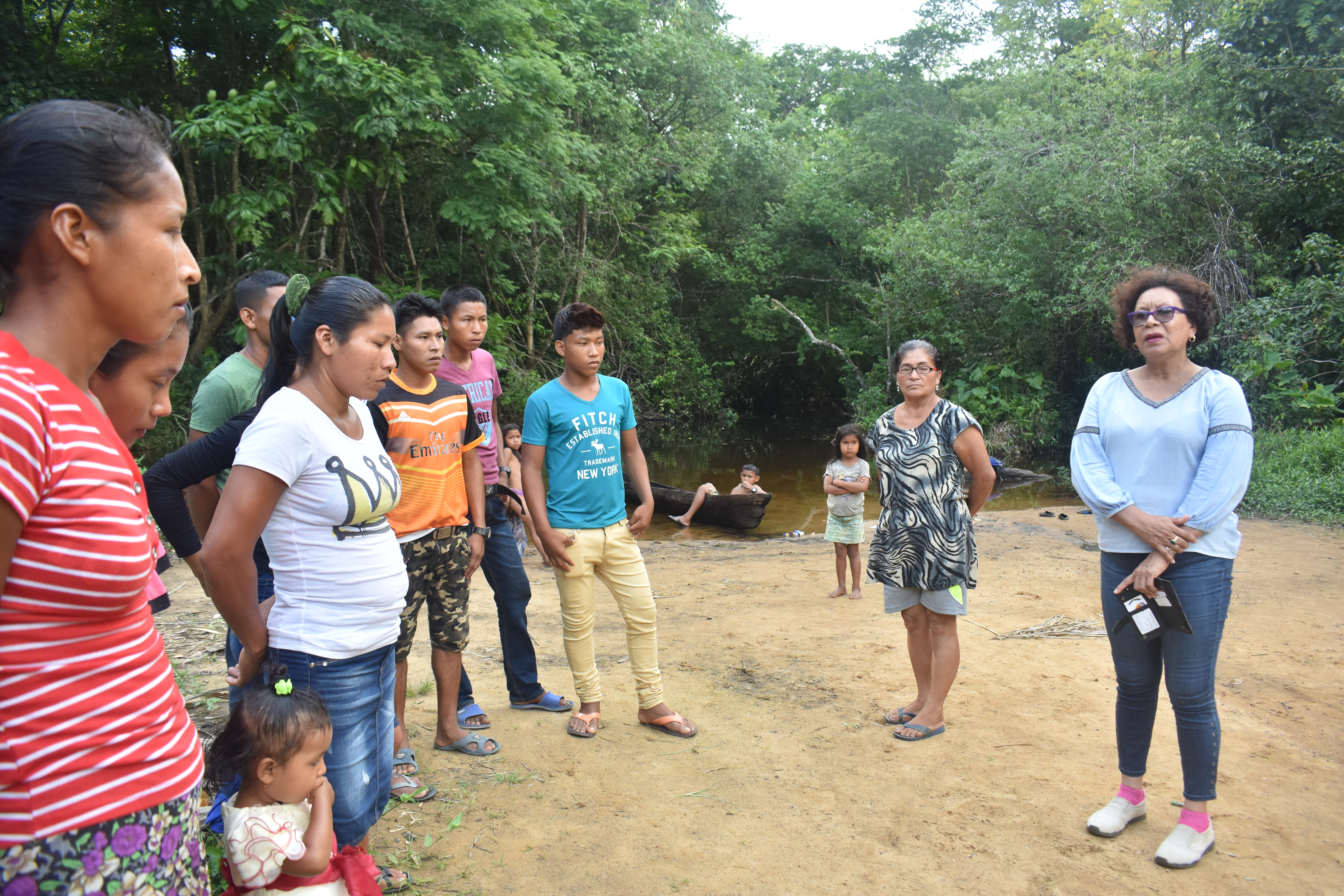 Excitement among twenty talented youth in Haimaruni in the Moruca sub-district, Barima-Waini, Region One, is brewing as the Hinterland Employment Youth Service HEYS program is changing the trajectory of their lives.

The youth there only a month ago completed the first six months of the one year program and already thriving businesses are noticeably evident.

During a recent visit to the village Minister within the Ministry, Valerie Garrido-Lowe, visited three of the business establishments and was very pleased with the efforts made by the youth there.

A couple opened a snacked in the area where the village has already started developing a tourism project located in close proximity of the Haimara Creek, a branch of the Waini River.

Cleveland David and his partner said since their business opened its doors the community has been very supportive and they will continue to work towards its expansion as they eagerly await the completion of the villages’ tourism initiative which will further boost their business venture.

Among other business initiatives undertaken are subsistence and poultry farming, fishing and a bakery.

Agriculture ventures there, however, are on the increase as the youth are working individually and as groups to plant acres of farm land with cash-crops and several permanent crops. The secondary school, the schools feeding programs, the village and neighbouring villages will be among the groups and institutions supporting these ventures, according to the REDO, Mr. Nigel Richards, who accompanied the Minister and her team to Haimaruni.

Parental involvement and support were also evident as parents continue to be active participants in ensuring their children’s business ventures are successful. One such example is a bakery established by two siblings, Shefiline and Shereen Smith. Father of the Smith sisters sought the expertise of a villager who built a six-foot wooden oven lined with aluminum sheets which they utilize to bake delicious pastries, bread, red cake (salara), butter flap and more.

The elderly Smith who wears many hats is a seasoned baker and three times weekly he would bake a variety of foods and the daughters who have already built a long list of supporters would venture into the village to sell their edibles.

Minister within the Ministry, Valerie Garrido-Lowe, and team recently visited the village and what is noteworthy is the fact that this is the first time in the history of the village that a sitting Minister of the Government has visited. The Ministerial team was also ready to financially support a number of the businesses established including the Smith’s bakery since the visit coincided with one of the scheduled baking days.

Members of the team were able to purchase snacks, drinks (sweet fly), red cakes and butter-flaps which were hot out of the oven.

The Minister said she feels proud that the youth have grasped the opportunity provided them and are now venturing into small businesses which represents an important economic advancement which will ultimately change their lives.

“Our Government, we have invested a lot of money in our youth to build capacity so that they can establish their own businesses and it’s really good to know that it’s working. I just ate a delicious tasting salara (red cake) for one hundred dollars, how fantastic” the Minister said.

The Minister in highlighting other business ventures said, “there is a shop by the creek and a large farm and they have started planting calulu and all those things… so I can see these youth of Haimaruni, most of whom are school dropouts, now have hope, they are going ahead and have a chance to live a good life. They are grabbing the opportunity and I am very proud of them”.

Basil Cornelius Senior Council of Haimaruni, satellite to the main village, Karaburi, acknowledged that parental support is a decisive factor in the success of the business ventures undertaken.

“They have started good initiatives that can work in the community and with continuous support coming from their parents their business can be successful. A year from now I see them having very successful businesses”, the Senior Councillor explained.

Haimaruni, which has a population of approximately one hundred and fifty, was generally ignored by the past regime and for the first time (2018) the village will benefit from a presidential grant (a Tourism Project currently on the way). Over the years, grants were used to fund projects in the mother village of Karaburi.

The HEYS Program which is the Ministry’s Flagship Youth Program, is aimed at giving indigenous/hinterland youth a second chance at life, and following its implementation in 2015, close to four thousand youth from all ten administrative regions have benefited.

This would have seen Government budget almost two billion dollars in the nation’s indigenous youth.