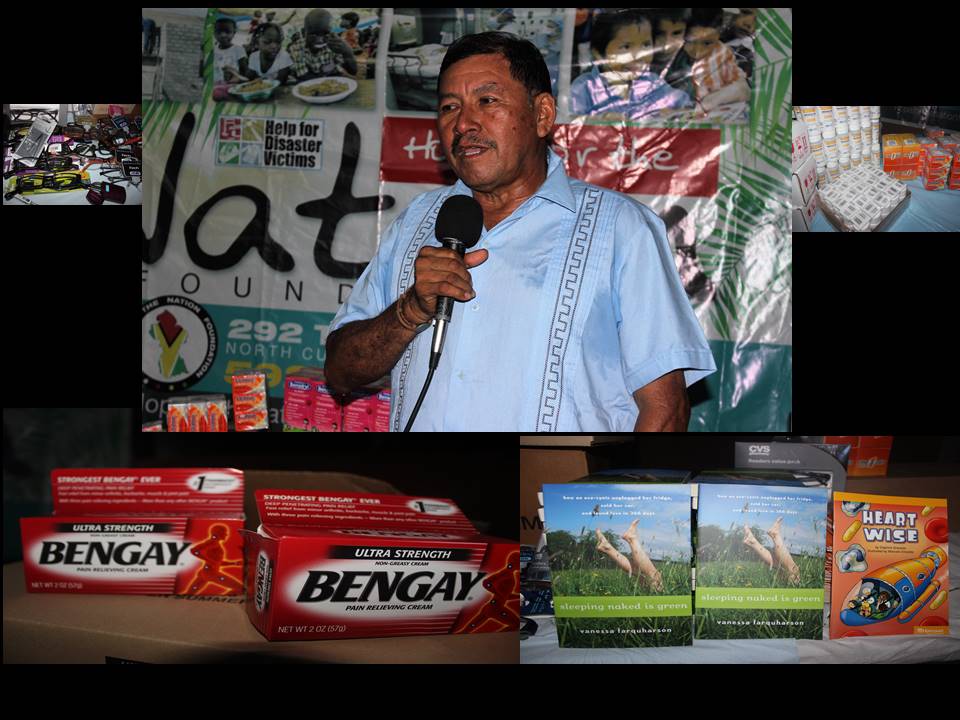 The Ministry of Indigenous Peoples’ Affairs has benefitted from the philanthropy efforts of Hope for the Nation Foundation, Guyana.

The Foundation recently donated four 40’ containers containing sixty million dollars’ worth of clothing, books, pharmaceutical supplies, spectacle frames, food items, among others articles which will be distributed to indigenous villages and communities.

The handing over was made at the Foundations bond located in Industrial Site, Ruimveldt, Eccles, East Bank Demerara.

Receiving on behalf of the Ministry was Vice President and Minister with responsibility for the affairs of the indigenous peoples’ the Honorable Sydney Allicock.

Minister Allicock in thanking the Foundation for making such a timely donation to the nations’ first peoples assured its support will have a lasting influence on beneficiaries.

In welcoming the birth of what is intended to be a fruitful relationship between the two organizations, the Honorable Minister assured that the indigenous peoples once given an equal opportunity will be able to make a significant contribution to national development.

More so, in highlighting a number of areas where the indigenous peoples’ who are considered to be the custodians of the forest continues to play an integral role in ensuring its preservation and Minister Allicock said “we have gold we have diamond, we have bauxite, we have timber, we have attractions such as Kaieteur, the Mountains, the rivers, the species the giants of Guyana that eighty percent of Guyanese do not understand or have not seen yet, and we the indigenous peoples have been able to preserve all of this”.

The Minister also took the opportunity to remind the nation that in exploiting the country’s natural resources this must be done without causing harm “that is like taking photographs, using fruits, using medicinal plants, to develop industries that can help us in tropical medicine and tourism generally and we can also make money from not harming the natural resource”.

President of the Foundation Dr. Abdel Bari indicated that he is very pleased that the Foundation has collaborated with the Ministry, since it has always been his desire to provide support to the indigenous peoples.

He also expressed delight that Minister Allicock and team were able to successfully exchange opinions and posited that future collaboration is imminent.

Dr. Bari noted that although the Foundation is relatively new, through collaboration with Cross International a Non-Governmental organization based in the United States is also very much interested in supporting among other groups indigenous peoples worldwide.

He said the Foundation has since requested a wish list from the Ministry where support can be forthcoming, with special emphasis placed on Agriculture diversification in the hinterland.

Dr. Bari also alluded to the Foundations interest in also collaborating with the Ministry to assist indigenous peoples create trade opportunities which will enable their produce to be sold particularly in the international market.

It is Dr. Bari’s firm belief that Guyana has great potential of being one of the richest countries, but it can only happen if there is a cohesive approach towards the betterment of society.

Hope for the Nation which was recently established here in Guyana is a Non-Governmental Organization aimed at providing the much needed support to groups or communities.