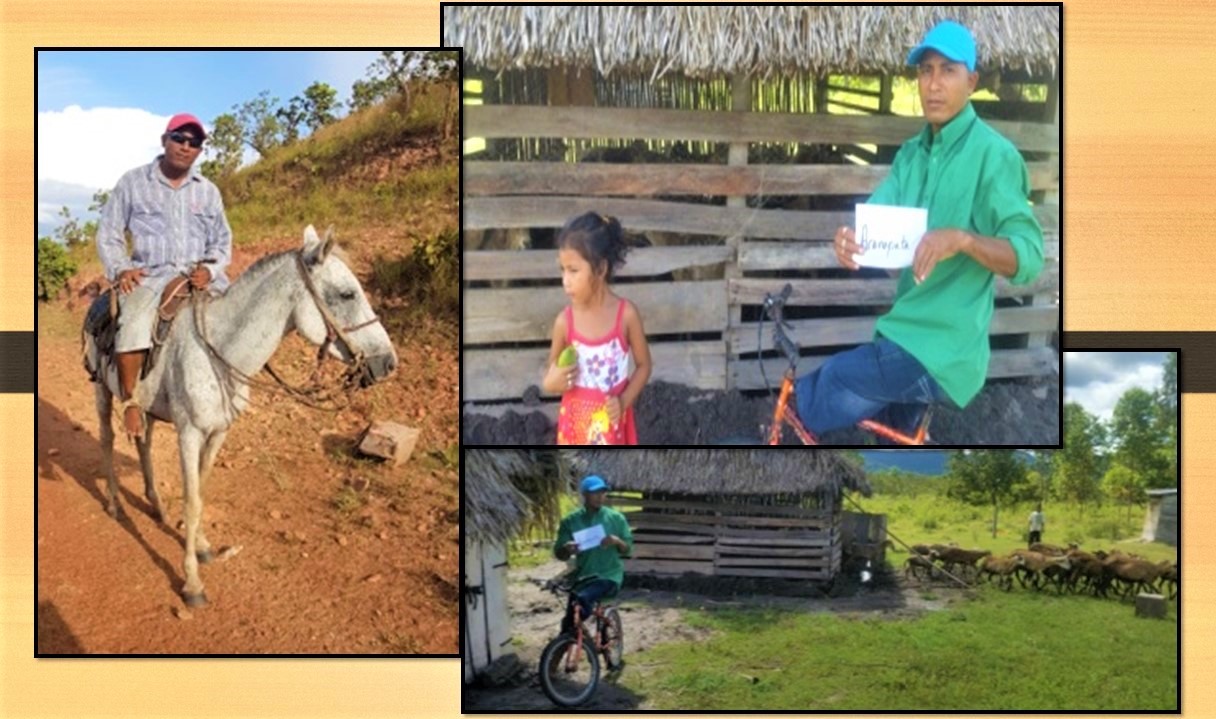 Rocliffe Rodrigues a thirty four year old entrepreneur in the Hinterland Employment Youth Service HEYS Program, a husband, a father of three (a six, three and a one year old) and an amputee says he’s proud of all his accomplishments since participating in the youth program in 2019.

Rodrigues and his wife who are HEYS participant, owns a growing animal farm in Aranaputa, North Rupununi, Region 9 with seven heads of cows, 106 sheep, twenty pigs, a duck farm and several horses.

He was able to defy the odds and together with his wife has created a sustainable livelihood for his family.

The enthusiastic farmer who is also an amputee revealed that in the earlier stages of getting his business on the road so to speak, the business faced its fair share of challenges but with support he was able to come this far.

He said his biggest fear was the fact that he has one leg which caused great uncertainty as it relates to his ability to grow his business since the negative forces were prevalent, compounded by an illness that was plaguing his animals, proper housing and fencing for protection.

Credit he says, must be given to a villager who saw his potential and kept encouraging him to continue and not give up.

“I wanted to give up, sheep getting sick, some going to people house and eat up deh things, so I decided to sell out and kill and sell and done with dah, but I reach this man and he told me to never give up and to this day he always tell me that. It was very hard but I still coming through and I am proud of myself because I have my own farm”, he said confidently.

He added that he came to the realization that “life doesn’t end there, you got to do what you got to do, do it like a man so not because I got a one foot I can’t do it, I never giving up.”

He said “in the next ten years I see myself as a big, big businessman I want no less than five thousand sheep, my own butcher shop, couple hundred heads of cows you know, I have to know how to set myself.”

Rodrigues also revealed that only last year, he was able to dig a tug well on his farm since it will ensure his animals have enough water year round.

Speaking about the opportunities HEYS has afforded him and several hundred others nationwide, Rodrigues posited that “the HEYS program was more than just a stipend, today plenty people out there want this opportunity and can’t get it. Plenty of them from here fall away and them well and strong and watch at one foot.”

“I proud of HEYS, I got plenty things because I made use of the opportunity. The other day, I sell some meat and I roll up to collect my money, one hundred gran and a couple of the HEYS students been deh and when I collect I buy dem one, one beer and deh happy”, he stated.

On the other hand, he said his personal development also comes with its fair share of challenges since “some people vex that I making it now you know, even some of my own friends they saying one foot getting rich and now he turning a snitch, but I doing what I got to do, that is my first priority.”

He said he is thankful for the support he continues to receive form his wife and the wider community and more so “the Government for giving us this opportunity.”

Like Rodrigues, the HEYS program also provided opportunities to the differently abled across the hinterland with many sharing life changing testimonies on the positive impact the program continues to make in the lives.