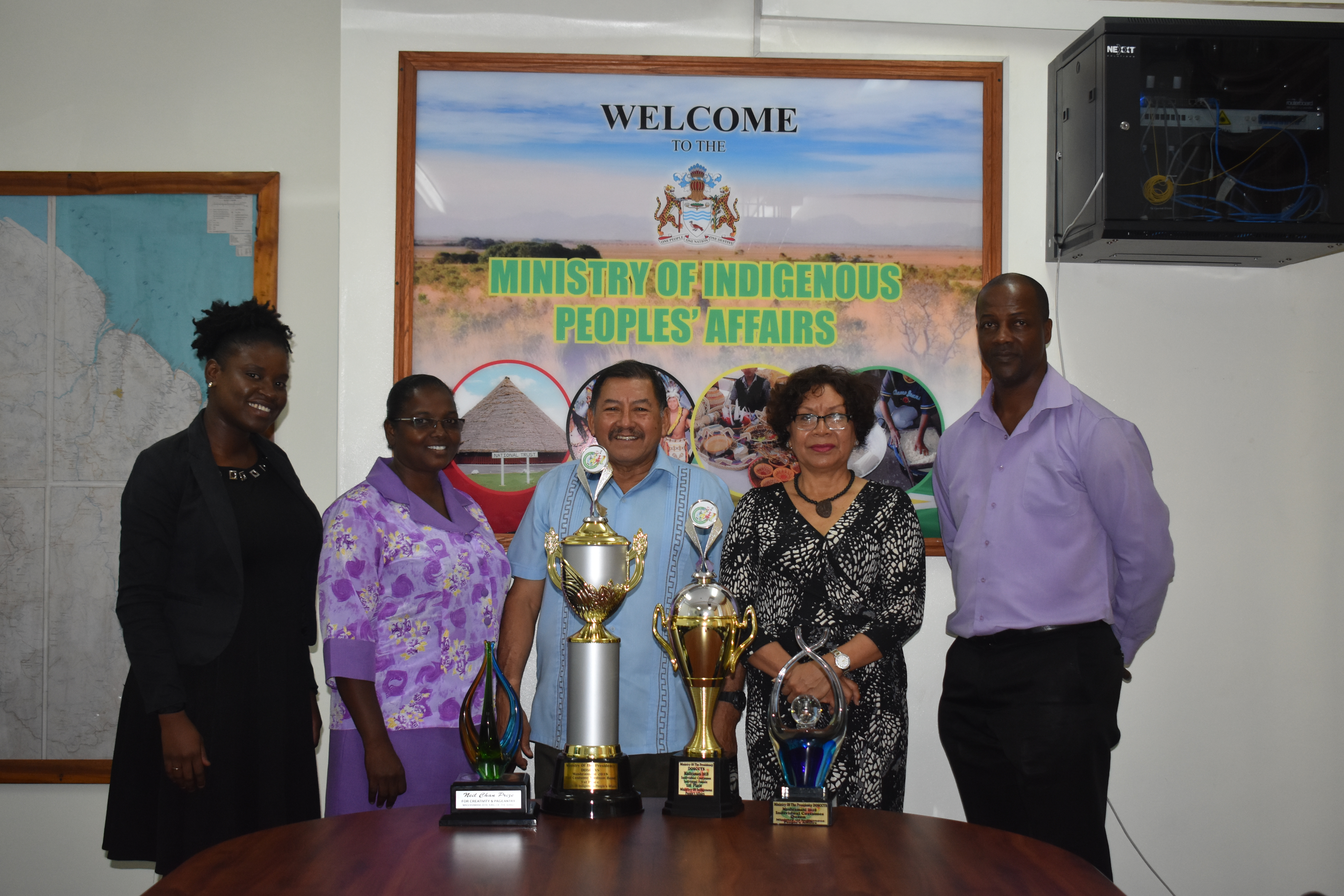 The Ministry of Indigenous Peoples’ Affairs has made history as it walked away with four of five prizes up for grabs in the medium band category of the just concluded Mashramani Float Celebrations on Republic Day 2018.

The Mash 2018 prize giving ceremony and Launch of Mashramani 2019 was held on Friday at the National Cultural Center, Homestretch Avenue.

The Ministry copped the King, Queen, Individual female and defended the full costume medium band prizes, however, missed out on a complete sweep as the male individual prize was awarded to a sister Ministry.

This was the first time the Ministry belted such a feat.

Vice President and Minister of Indigenous Peoples’ Affairs Sydney Allicock congratulated the Mash Committee for successfully organizing activities surround the Ministry’s participation in the annual celebration, while also thanking the revelers for doing an exemplary job on the road on Mash day.

Trevor Alfred designed the Ministry’s costumes and was duly rewarded, while also copping the most coveted prize in the Designer of the Year Award.

The Ministry’s float which showcased the indigenous culture was celebrated under the theme, “Cooperate to make Guyana Great Beyond 48”.

The King costume which was displayed by Deon Andrews depicted the legendary bird which is found in the rainforest and live in harmony with each another. This will encourage all Guyanese to cooperate in order to build a bright future. The costume which depicts our national colours also signify our rich minerals, forest, agriculture as well as sustaining our tradition for future generations.

The Queen costume depicts the nest of a bird in preparation for her young which signifies the future. It is encouraging all Guyanese that collectively it will result in nation building. The green vine depicts the rich culture that holds us together as Guyanese, the broken hatching eggs the forthcoming of the new generation. The blue signifies mother earth and which we must preserve for future generations, while the feathers are a representation of what our future would look like- magnificent, bright and rich.

The individual female which was displayed by Miss Brandy Thomas depicts the female elder who teaches the young indigenous person to take care of their husbands and families likewise transmitting customs and the way of life.

The revelers costume depicted hard working Guyanese with specific emphasis on the indigenous people in their traditional wear in celebration after hard work.

Earlier in the evening the Hinterland Scholarship Division also walked away with the first prize in the Children’s Float Parade.

Meanwhile, Guyanese will be celebrating Mash 2019 under the theme “Celebrate Mash 49 with Victory in Mind”, as the winning submission was unveiled during the evening’s ceremony.

The Ministry of Indigenous Peoples’ Affairs continue to lead the way in promoting the richness of the indigenous culture and as such has implemented programs that will ensure tradition is preserved. Among them, a language revival project in schools in several regions, promotion and assistance to cultural groups, expositions which will also pave the way for economic development.