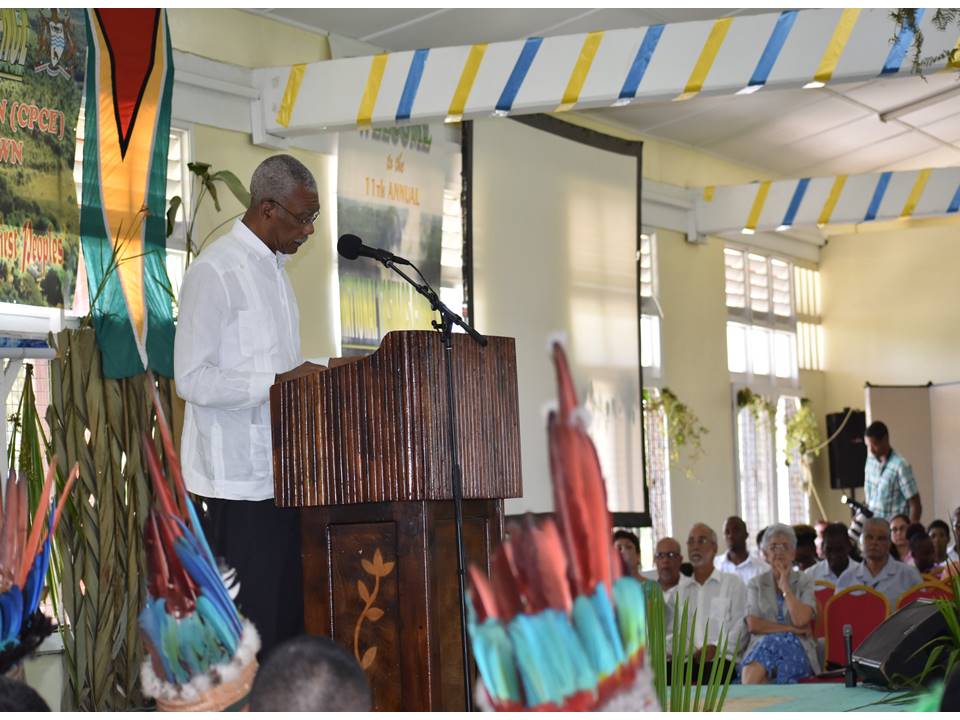 His Excellency David Granger at the opening of the 11th National Toshao’s Conference earlier today reminded of the importance of cooperation which will ensure the social and economic wellbeing of the indigenous peoples’ are realized.

The conference is being being hosted by the Cyril Potter College of Education, Turkeyen Campus, East Coast Demerara.

President Granger said “we must work together to improving the standards of living, in terms of these three areas: access, attendance and achievement. ….we have to work together to create jobs for our young people, where they live, in their communities… more importantly Toshao’s, good governance in the areas of  social protection we have to take these issues seriously they cannot be swept under the carpet”.

The President also spoke to the urgency of addressing murders, trafficking in persons, non-communicable diseases, prostitution, substance abuse, teenage pregnancy and suicide not only in hinterland but at the national level.

Meanwhile, Vice President and Minister of Indigenous Peoples’ Affairs Sydney Allicock questioned statements made by outgoing Chair of the National Toshao’s Council Joel Fredericks during his presentation, whether they were coming from the Executive or his personal attack on the government.

“I am not certain if we ask what contributions you made to the presentation of the chairman if your voice was part of that, so these are things we need to settle here, we need to come together and find a way of how we should do things together”.

Sending a strong message to the NTC Minister Allicock used the eco-tourism sector as an example of how to succeed saying, operators must show hospitality and not hostility in order for the business to thrive, a message he hopes the NTC and the Executive will embrace.

Fredericks also spoke about what he believes is a lack of dialogue, which Minister Allicock reiterated that “we believe in dialogue, we believe in the contribution that you make for allowing your communities to be better off and that is why we are spending sixty six million dollars, this government is spending sixty six million dollars it’s not because we don’t want a good name, but because we know there are issues out there and the government is aware and that you are part of the solution”.

Minister Allicock while expressing faith in the leadership at the level of villages and communities noted that “I detect the need for a stronger, more unified approach to decision making at the level of the executive. I urge that we recognize the need for deepening the process of consultation of critical issues between that body and the wider leadership of the NTC. This is not an insurmountable challenge. Let us all at this conference commit to working to ensure that we overcome this challenge”.

Minister within the Ministry Valerie Garrido-Lowe in her address pointed to the many achievements by the Ministry and the indigenous peoples.

Among those mentioned were the thriving eco-tourism sector, agriculture – the Paramakatoi Sun-Dried Tomato Project and the Hinterland Employment and Youth Service HEYS Program which has reached new heights.

The Honorable Minister said government has recognized there are many challenges “but there is a solution to every problem and your government is willing to do everything possible to bring economic empowerment and dignity back to our indigenous peoples”.

The Minister also addressed a number of challenges faced by the indigenous peoples pointing to the recent floods in Region 8 which affected more than twenty families and the tragedy in Regions 7 Friday last which claimed the life of a twenty seven year old pregnant mother.

She is left to mourn two young children, other relatives and friends.

Other families were also affected and Minister Garrido-Lowe assured “Toshao and councilors and residents of Jawalla, you are in our thoughts and our prayers and rest assured that your government will be there to render the assistance you need”.

Mr. Brian Tiwari, the Civil Defence Commission and cooperate Guyana were recognized by the Minister for their support during these difficult times.

The six-day national Toshao’s Conference is being held under the theme: “Good Governance – A Brighter Future for Guyana’s First Peoples”.