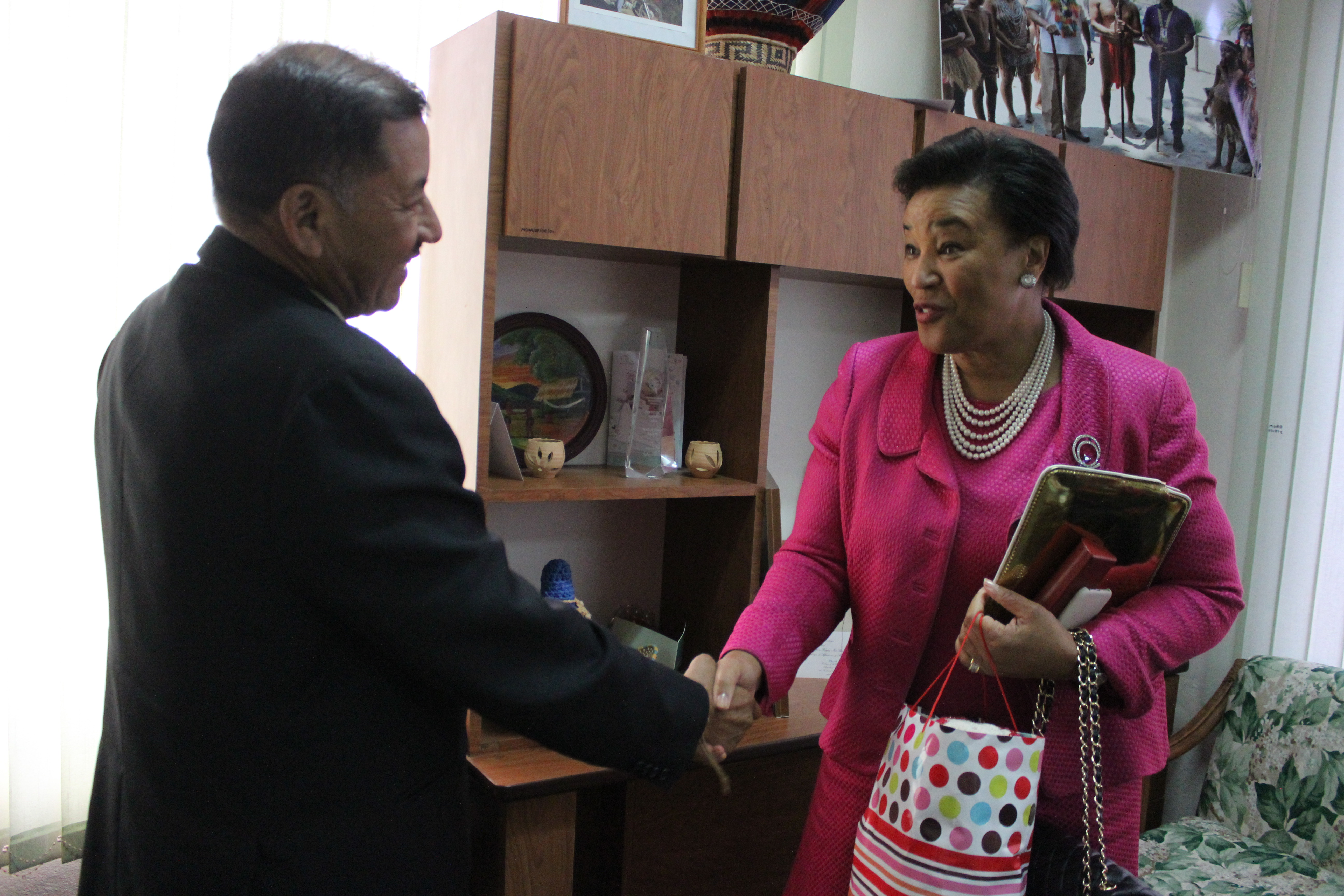 The preservation of Guyana’s rich natural resources particularly our forest resources coupled with support from the Commonwealth of Nations were among issues discussed when the incumbent Secretary General of the Commonwealth of Nations Baroness Patricia Scotland paid a courtesy call on Vice President and Minister of Indigenous Peoples’ Affairs Sydney Allicock and Minister within Valerie Garrido-Lowe.

Baroness Scotland opined that in 2015 there were a number of changes in terms of a renewed focus, direction and a greater ability to provide more support to Commonwealth nations.

“This is particularly so with Climate Change because we here in the Caribbean are directly affected by this exponential threat that is posed to all of us and of course Guyana is one of the richest countries in terms of natural resources the wonderful flora, fauna, trees Guyana has everything gold, diamond, oil so in terms of how we assist is incredible good not just for Guyana but for the whole region,” Baroness Scotland noted.

“I know that right now we are helping Guyana to deal with issues relating to oil, there has been Venezuela the question of course but, how to exploit that to the benefit of all Guyana’s people and the Commonwealth Secretariat and the Oceans group are helping with territorial delineation, more so how do we get the best contracts, how do we implement things in a way that makes real sense,” was also alluded to by Baroness Scotland.

The pivotal role played by Iwokrama International Centre for Rainforest Conservation and Development was also underscored by the incumbent Secretary General.

“The contributions that Iwokrama makes to that climatic stability is incredibly important and so I think it’s to be applauded the way Guyana for the world has sought to harvest the good things that come out of Iwokrama and preserve them, and my aspiration for climate is not just for us to meet the 1.5 but so actually see what we can together do to reverse climatic change,” said the Baroness.

What was highlighted as a significant implement to slowdown the ever changing climatic conditions and provide assistance according to the envoy is Carbon Farming “the whole issue on how to harvest that because many countries in the world now are trying to meet their top 21 commitments and the question is how can they do that within the same frame work of their countries so they will be looking for other countries to assess and to assist.”

In welcoming the Baroness to Guyana and to the Ministry, Vice President and Minister of Indigenous Peoples’ Affairs Sydney Allicock also alluded to the significant strides made in terms of climate change and the responsiveness by key players in this regard.

The Minister noted that from the onset, efforts to mitigate this phenomenon with regard to the opt-in mechanism, posed some amount of challenge particularly within Indigenous communities since the concept was not full understood.

He however remains optimistic that given the fact that the indigenous peoples now have access to technology, such as the internet and most recently the commissioning of two radio station in the hinterland regions, information gathering and sharing will ensure goals are realized.

Minister Allicock concluded by envisaging that once partnerships are established working towards one common goal is inevitable.

Also part of the discussions were Permanent Secretary Vibert A. Welch and Legal Advisor to the Minister David James, while accompanying the Baroness were Ambassador to the Commonwealth of Nations Lolita Applewhite, Patricia Duncan from the Commonwealth Secretariat and Donnette Streete Liaison Officer in the Ministry of Foreign Affairs.

Meanwhile, Her Excellency Baroness Scotland was elected Commonwealth Secretary General during the Commonwealth Nations Summit in Malta in 2015.

The Baroness whom herself hails from Indigenous lineage is the first woman, the second Secretary General from to the Caribbean and the sixth Commonwealth Secretary-General to take up this post.