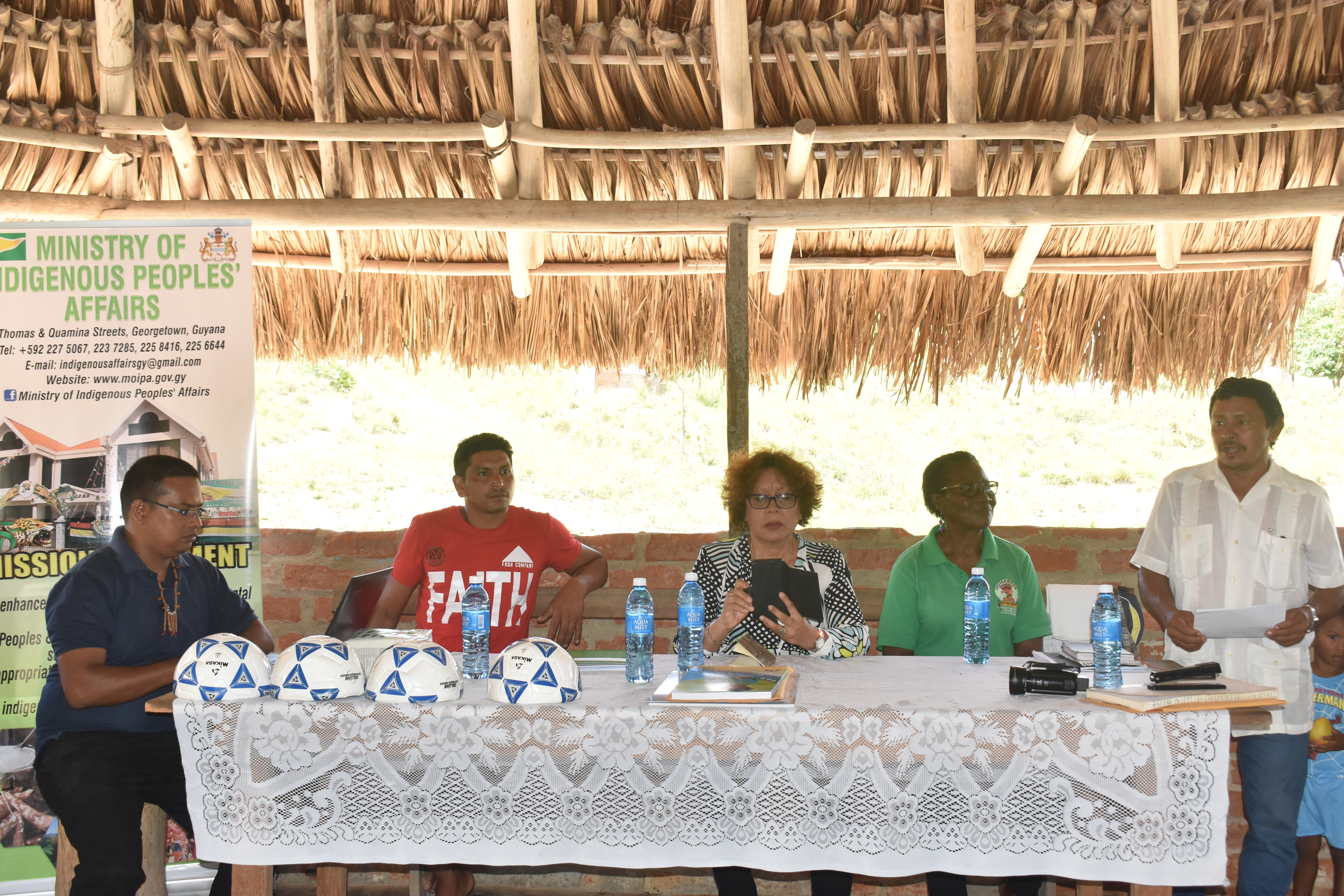 Improving telecommunication across the Hinterland remains on the front burner of the Government. Licenses

During a recent meeting with residents of Monkey Mountain, Potaro-Siparuni, Region Eight (North Pakaraima) Minister within the Ministry of Indigenous Peoples’ Affairs, Valerie Garrido-Lowe, assured them that the Ministry of Public Telecommunication is working assiduously to ensure communities are equipped with internet connectivity.

The Minister said that bridging the communication gap between hinterland and the coastland remains a priority for this Government.

“Improved communication will curb the misinformation reaching the indigenous people and every effort is being made by the Coalition Government led by President David Granger, towards bridging this gap.”

Minister Garrido-Lowe mentioned the radio stations that were established recently in Mabaruma, Lethem, Aishalton, Mahdia and Orealla and the training of local youth as radio announcers.

A section of the crowd that gathered for the community meeting at Monkey Monkey, North Pakaraima, region 8.

As it relates to road works the Minister heard several including the timely payment for completed road rehabilitation works, the period for the awarding of contracts and improving health services. With regards to the 10% retention, the Minister promised to contact the REO to ascertain the delay.

The Minister explained to the people of Monkey Mountain that the government is one that listens to the issues of the people and their concerns will be addressed at the earliest.

The Minister also took the opportunity to inform residents on the status of Guyana’s oil find. “I told you about 20/20 and the oil money that Guyana will be receiving. This is where we need your voices and your suggestions and proposals. Every village speak about the state of the roads at every meeting and the urgent need for them to be fixed; if we have that in writing I am sure that it will be considered.

Addressing the Land Titling situation, Minister Garrido-Lowe said “there are various issues that were around for a very long time and remain unsolved, dating back to almost twenty years ago as in the case of the Upper Mazaruni”. That case is still engaging the courts.

She also cited cases pending since 2007 but was “happy to report that neighbouring Paramakatoi has been demarcated and by the end of 2018, four additional villages will receive titles”.

As it relates to improved Health Services, Minister Garrido-Lowe assured villagers that the Ministry is working to ensure that sooner rather than later “doctors will be assigned to the Health Centers across the North Pakaraima” as in the case of neighbouring Region 7 (Mazaruni) which will undoubtedly improve the level of services offered to residents.

The Minister also took the opportunity to congratulate newly elected Toshao Lincoln Singh and councilors for their commitment to the continuous development of their village while also sharing vital information on leadership qualities which will ensure success, among them “being courageous, kindness, honesty and hard-working”.

She also reminded the newly elected leaders that they are there to unite the people and once this is achieved development will be realized.

Monkey Mountain is poised to receive significant development with the soon to be established Lapidary Project which will see several youth trained to operate the facility.

Households will also benefit financially upon supplying the facility with semi-precious stones which will be processed into semi-precious jewellery and craft pieces to meet international standards.