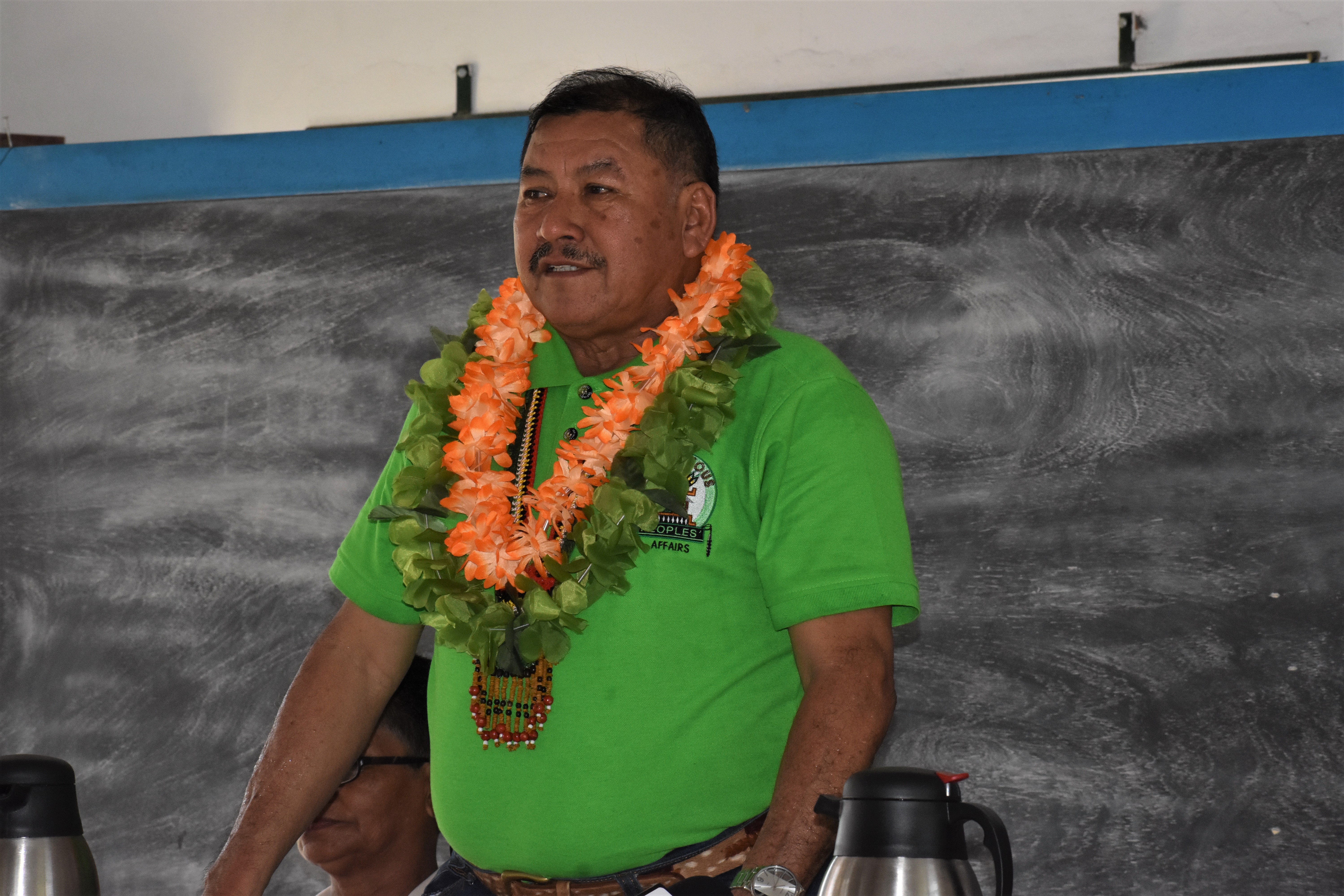 Vice President and Minister of Indigenous Peoples’ Affairs Sydney Allicock said the APNU/AFC Government will continue its efforts to empower each and every Guyanese so they can enjoy the “Good Life” promised.

Minister Allicock and Minister within the Ministry of Finance Jaipaul Sharma engaged residents in Agatash and its environs on Wednesday as part of the “Government Comes to You” outreach in Cuyuni-Mazaruni, Region 7 (Lower Maz).

Residents turned out in their numbers to listen, pose questions and seek clarification on governments developmental plans for the communities of Agatash and Dagg Point, which are CDC’s but also receive support from the Ministry of Indigenous Peoples’ Affairs.

Minister Allicock said “over the last four years you have seen the changes in your life’s direction, we have heard the voices of the people from across this country and we are working for the cause and not the applause”.

Uniting the nation and working together remains paramount on Governments agenda and Minister Allicock reminded that the coalition government was formed on the premise that “each Guyanese needs to be properly represented and have a good life because this is the vision of President David Granger”.

Further development according to the Minister, will be visible when villages and communities particularly in the Hinterland produce and execute their respective Village Improvement Plans which are long terms developmental plans (5-10 years).

He continues to encourage villages to commence the process and should they require technical and other support, the Ministry will be more than willing to assist.

Additionally, residents were updated on the recent ruling of the Caribbean Court of Justice (CCJ) on the December 21 No-Confidence Motion, and Minister Allicock said “this does not mean we will just lay down our working tools and give up, now is the time to work, you have to work to develop, work to get your children to school, work to ensure they get the best possible education so they will be properly rounded”.

Meanwhile, Minister Sharma said the developments in Bartica is living testimony of Governments commitment to the Guyanese people since the track record of the past regime is questionable.

Minister Sharma said in 2014 under the PPP/C Government some two hundred and seventy five million dollars was budgeted for Bartica “and today under the APNU/AFC Government capital alone is $1.9B just imagine that, so its $1.6M more we have put into the economy of Bartica”.

He assured residents that an Information and Communication Technology (ICT) Hub will soon be installed in Agatash and he took the opportunity to encourage residents to capitalize on the benefits that comes with such developments.

Minister Sharma said the APNU/AFC Government has bold and elaborate plans for the Bartica Township as part of pursuing its Green Agenda.

He said “as the President has indicated, Bartica will be the model town and we have indicated already that there will be a solar farm and it will produce in excess of 1.5 Megawatts of electricity this is renewable energy, green energy, this is the way this administration wants to go… cheap energy will be to your disposal and this is an opportunity we would like you to take”.

Meanwhile, $631M was made available for distribution as loans and grants to pursue green projects in Bartica and to date the community boasts a Boardwalk, an improved community centre ground, better roads and bridges, better sanitation, improved ICT infrastructure and a new radio station with the aim of making Bartica a model green town.

Water security is also high on Governments agenda for the Township and a Department of Public Information (DPI) report quoted Managing Director of the Guyana Water Inc. Dr. Richard Van West-Charles in early June saying that “with the new technology we have with drilling wells I feel that we should be able in Bartica itself and 4 Miles and 5 Miles… to drill one or two wells which will give us more water security within the Bartica area”.

The Fire Station is also slated to receive a major upgrade.