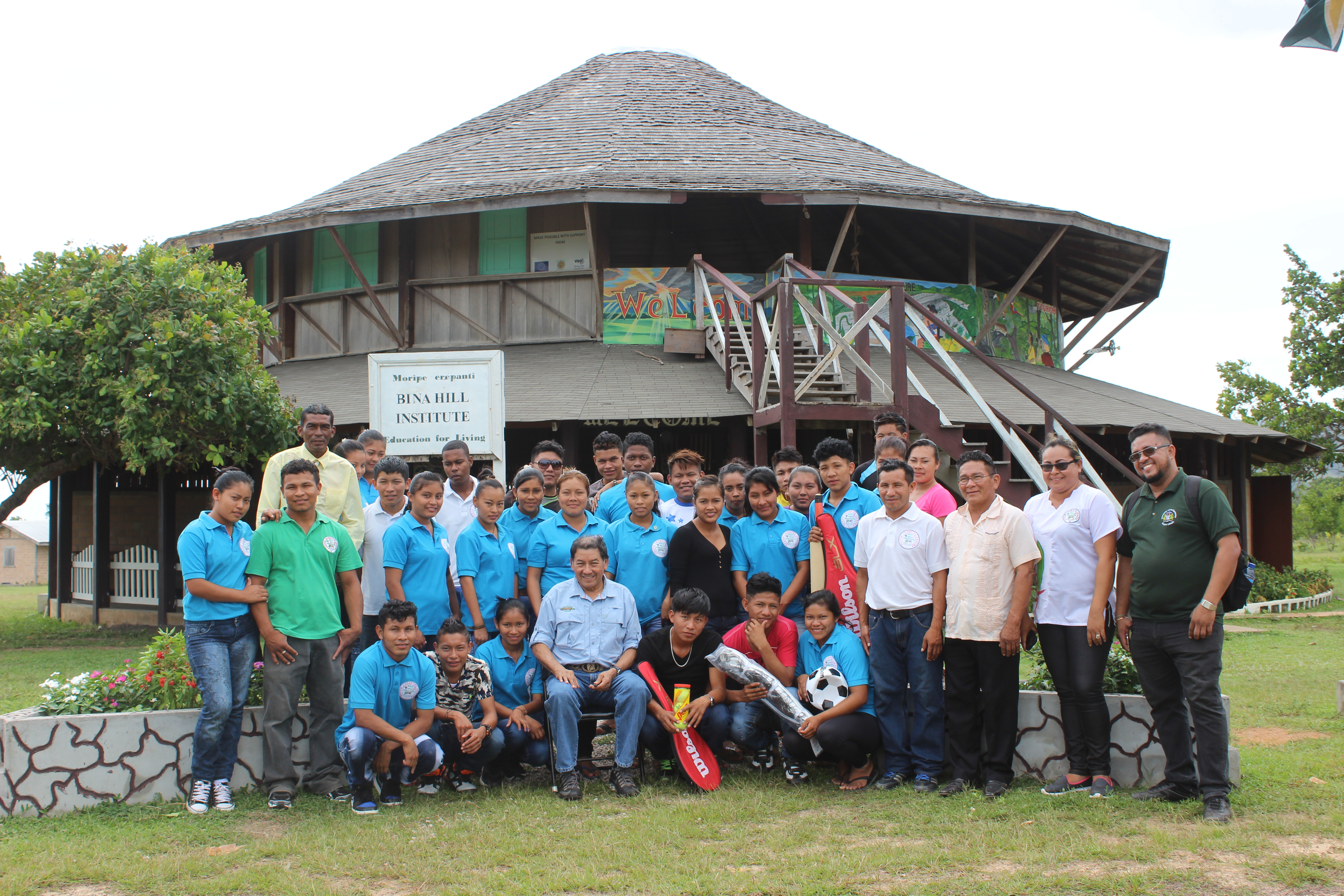 Students of the Bina Hill Institute for Research, Training and Development in Region 9 were reminded of their roles and responsibilities since they are poised to becoming the movers and shakers of the future.

Students were being addressed by Vice President and Minister of Indigenous Peoples’ Affairs Sydney Allicock during a recent visit to the Region.

Minister Allicock reminded students that “you are no longer nursery school students, primary school students or secondary schools students but young strong intelligent students looking to create that livelihood for yourselves, you have your communities and people to represent so now is the time to make full use of the opportunities available”.

Shamica Wilson a second year student from Warapoka Village in Region 1 said “this has been a great learning experience for me, it has allowed me to gain knowledge in subject areas like Tourism, Agriculture, Information Technology and I want to learn more so I am not going to stop here”.

Another student Lalita Lewis from Paramakatoi has indicated that the training received will be a useful tool in allowing her dream of being an entrepreneur operating in the Tourism and Agriculture Sectors to become a reality.

“I will be doing Tourism and will also be planting a farm so that my produce will be used in my business. But while I get this going I plan to work with the Paramakatoi Tomato Project so as to gain more experience and I will also be selling my tomato to the factory that we plan to have there. I will be able to save my money so I can do my own business”.

Tourism and Agriculture are two core subject areas embark on at the Institute.

Alphonso King noted that the Tourism curriculum which began some five years ago has seen significant growth and “it has had a great impact on the youth because it is something they have never done before and now that they have started it the enthusiasm is there. In the five years I have been here most of my students have gone on to have careers in tourism some of them work in hotels, lodges, and some are right back in their communities working”.

According to King, second year students are currently receiving first-hand training and “right now seventeen of them are at lodges because in the first year they do the theory and in the second year we let them go and do practical which will be very useful to them when they would have finished here”.

Agriculture is a critical aspect of food security on the local, regional and international spectrums, and the Bina Hill institute continues to lead from by example.

It is compulsory for the youth there to participate in Agriculture production and over the years they were able to be self-sufficient as it relates to providing meals for their kitchen by cultivating their own farm along with chicken and cattle farms.

Miss Pauline Scipio who is responsible for Agricultural activities there, said this aspect of the curriculum is impacting positively on a number of villages in close proximity in terms of supplying the local market.

“We are getting a lot of orders for our locally grown chicken, we are doing organic farming, we have a lot of ochro, we just finished reaping calulu, we have sweet and hot peppers, and this was the first time we planted carrots which was really amazing. The school’s feeding program in the region is also benefitting from our farm”.

Scipio is a resident of Suruma Village has chosen to return to the region to give back to “my people” commended the Institutes Administration and the Government for its commitment to improving the standard of learning there. She expressed confidence in knowing that once the students have graduated they will be able to make a significant contribution to society.

She added that the feedback form villages to date are commendable.

Meanwhile, Marketing in any business venture requires key skills set and Jasu Xavier who has been tutoring Business Management at the Institute for just over a year, acknowledged that “the students are very smart and they learn very quickly which has helped them to excel… they are being taught how to be excellent business men and women so for us here it is important for us to be good mentors”.

Minister Allicock also handed over a number of sport gear and fencing materials to the Institute.

Plans to venture into Aquaculture production are also in motion with the commencement of ground preparation (digging of a pond) which according to Scipio has the capacity to accommodate in excess of ten thousand Ttambaqui (Colossoma Macropomum).

This is a freshwater species of serrasalmid predominantly found in neighbouring Brazil.

The Bina Hill Institute which was established in 2001 has been working in tandem with several partners under the umbrella of the North Rupununi District Development Board (NRDDB).

The Institute has expanded its training efforts to include natural resource management, traditional knowledge systems, building capacity for both occupational and economic development and also supports adult and distance education and several literacy programmes.