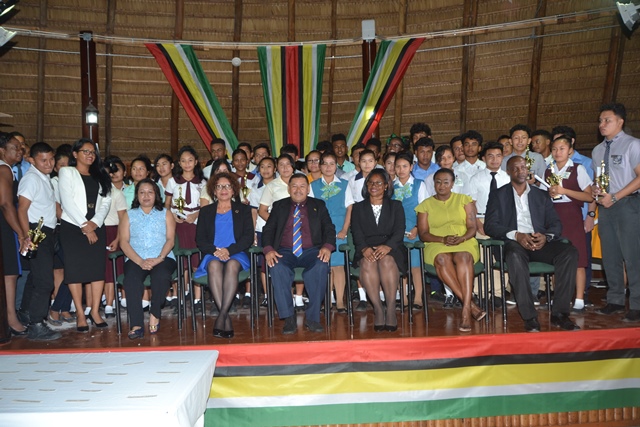 Some 122 students have graduated from the Hinterland Scholarship Programme (HSP), pursuing a secondary, tertiary and technical education at institutions not accessible in their communities.

Graduating were 91 secondary level students; 23 students at the technical and tertiary level; and eight students who completed the Caribbean Advanced Proficiency Examination (CAPE).

During his featured address today at the graduation ceremony at the Umana Yana, Kingston, Minister of Indigenous Peoples’ Affairs, Sydney Allicock said that for Guyana to take its proper place on the world stage, it must have an educated nation. It is against this background, Minister Allicock said, that much of the state’s resources over the past three years have been dedicated to education and training.

“Education generally and this scholarship programme, in particular, is not a privilege, it is a right,” Allicock told them. “You have exercised your right to an education and your government has demonstrated its commitment to you by providing the facilities which have so far enabled you to achieve your goals in this regard up to this point.”

The programme also recorded a 91 percent pass rate at CAPE with 59 passes with grades 1 to 4; and 90.1 percent passes at CSEC in 2017, as against an 83.3 percent pass rate in 2016. Fourth formers Reseda Hack and Canisha Primo of Bartica, Region Seven, who attend Queens College, also secured distinctions in mathematics.

Minister within the Ministry of Indigenous Peoples’ Affairs, Valerie Garrido-Lowe said that the programme is a tangible testimony of human capital development within the indigenous fraternity. During her charge to the students, Minister of Public Affairs, Dawn Hastings-Williams urged the students to chase their dreams, by working strategically and assiduously with honesty and integrity, giving their best while applying their skills.

Supported by the government, through the Ministry of Indigenous Peoples’ Affairs, the programme provides academic opportunities at secondary, tertiary and technical levels and promotes the integration of hinterland students into the wider Guyanese society.