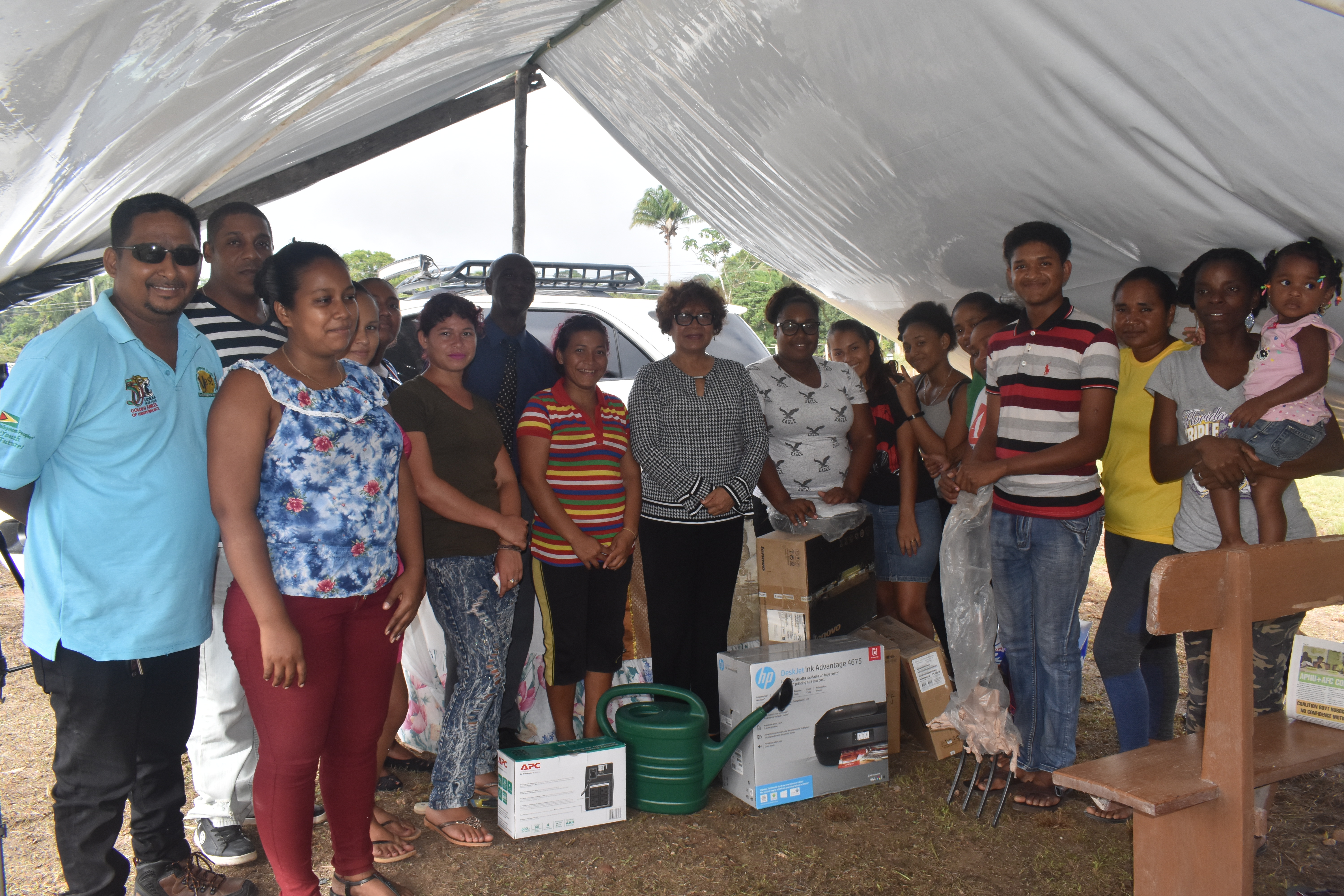 Government has invested more than forty five million ($45M) dollars towards building the capacity of indigenous youth from Three Friends, Old England/Siberia and Coomacka Mines in Region 10 and Silver Hill and Kairuni in Region 4.

This investment was made possible through the Ministry of Indigenous Peoples’ Affairs Flagship Youth Program, the Hinterland Employment Youth Service HEYS, during the second phase of the program which commenced in August 2017 and conclude in July 2018.

The program saw twenty-one youth from all of the communities except Silver Hill with fifteen youth, fully capitalizing on this investment as they venture into lucrative business ventures.

During a Ministerial Outreach to the respective communities on Wednesday which was led by Minister within the Ministry Valerie Garrido-Lowe, youth spoke passionately about the positive impact the HEYS program is having on their lives.

Nola Lamazone a participant from Three Friends in expressing profound gratitude to the Government for this program, said her business continues to expand to a point where she is now able to provide employment opportunities.

“I started out as the eldest on the HEYS participant list and when we had to sit in the class room for six months I said I have to make some money on the participants so I started making egg ball, plantain chips, tamarind balls, drinks even though that was not my ambition, which was to sell clothes so I saved more and I switched out and started selling clothes. To date, I bought some chickens which would produce eggs for my egg ball business. I also bought a freezer and support the HEYS participants who sell chicken. And you would find that you would want to do so much so you find a job on the side, so I have a part time employee who would work with me”, Lamazone said.

Rowel Douglas from Siberia/Old England said “I must thank the Government for bringing this program in Old England/Siberia because it has done a lot for me because I started off with fifty chickens and now I can buy two hundred chickens and I’m bringing it in stages. I cannot provide for myself because when I’m finished plucking, it’s all sold out and I don’t even have none for myself”.

“I want to thank the Government for not just Siberia/Old England community with the HEYS Program, but throughout Guyana, it would have benefitted many young people who would have had a second chance. I didn’t just do chicken, I had a variety of businesses when I was doing the chicken I was doing chips, for the Christmas I provide some preserved fruits, I’m also starting a new business –brush cutting and spraying of yards, beside that I would like to go into lettuce and celery planting. This is one of the projects they would have teach us to be self-sufficient”, Maurica Rudder of Siberia/Old England acknowledged.

Candancy Wolf of Silver Hill is also expressing gratitude and stated that, “I have extended from a small grocery shop and I have a small fast food where I sell chicken and chips, I had a refrigerator and I could have afforded to buy another one and also a bigger engine so that I could have pushed both refrigerators and I want to get into ice cream business so we are thankful to the Government that I can build myself in so many ways”.

Arrienna Hosea noted that, “I am grateful and thankful for HEYS. The business we have is a partnership (siblings Annia Hosea), we started small and we have grown from the time we achieved all the things HEYS give to us. We see where we develop. I also buy another shop and around June I will open that shop, and I know because of HEYS that is where I am. I don’t really have words to say I’m grateful”.

Like Three Friends, Siberia/Old England, received approximately $9.5M dollars through the HEYS program, monies which would have contributed significantly to the community’s economy.

Some fifteen youth benefitted in Silver Hill which saw an investment of $5.4M in stipend, each of them receiving a fifty thousand dollars grant ($750,000) and two facilitators who each received sixty five thousand dollars monthly for seven months ($910,000). This amounts to $7,060M invested in the youth of Silver Hill.

Over the last two years, three thousand seven hundred and ninety five (3,795) youth in 222 villages and communities across the Hinterland benefited from training in life skills, vocational interests and entrepreneurial skills.

In 2019, youth with existing businesses would receive a further boost with an additional fifty thousand dollar grant.

This is a defining moment in the lives of the nations’ indigenous youth, the staunch commitment made by the David Granger led coalition Government to the indigenous peoples.

Minister Garrido-Lowe, who has responsibility for women, children and youth was visibly moved to tears on hearing the testimonies of the youth and the positive effect the HEYS program continues to have on their lives.

“It is a joy to serve my people and a special joy to work with young people because young people are the leaders of tomorrow and if you work with them today, you can sit down in your old years and admire the product you have helped to nurture in your community and country. Everybody deserves a second chance and your Government, the APNU/AFC Government has invested close to two billion dollars in our young people; it shows we care and that we have confidence in our youth and our people. I can assure you that your Government has created so many opportunities for you, so it is time for you to go after those opportunities”, the Minister urged.

Villages visited during the outreach, also received their HEYS resource kits which will further boost their business ventures. The kits were handed over by Minister Valerie Garrido-Lowe.