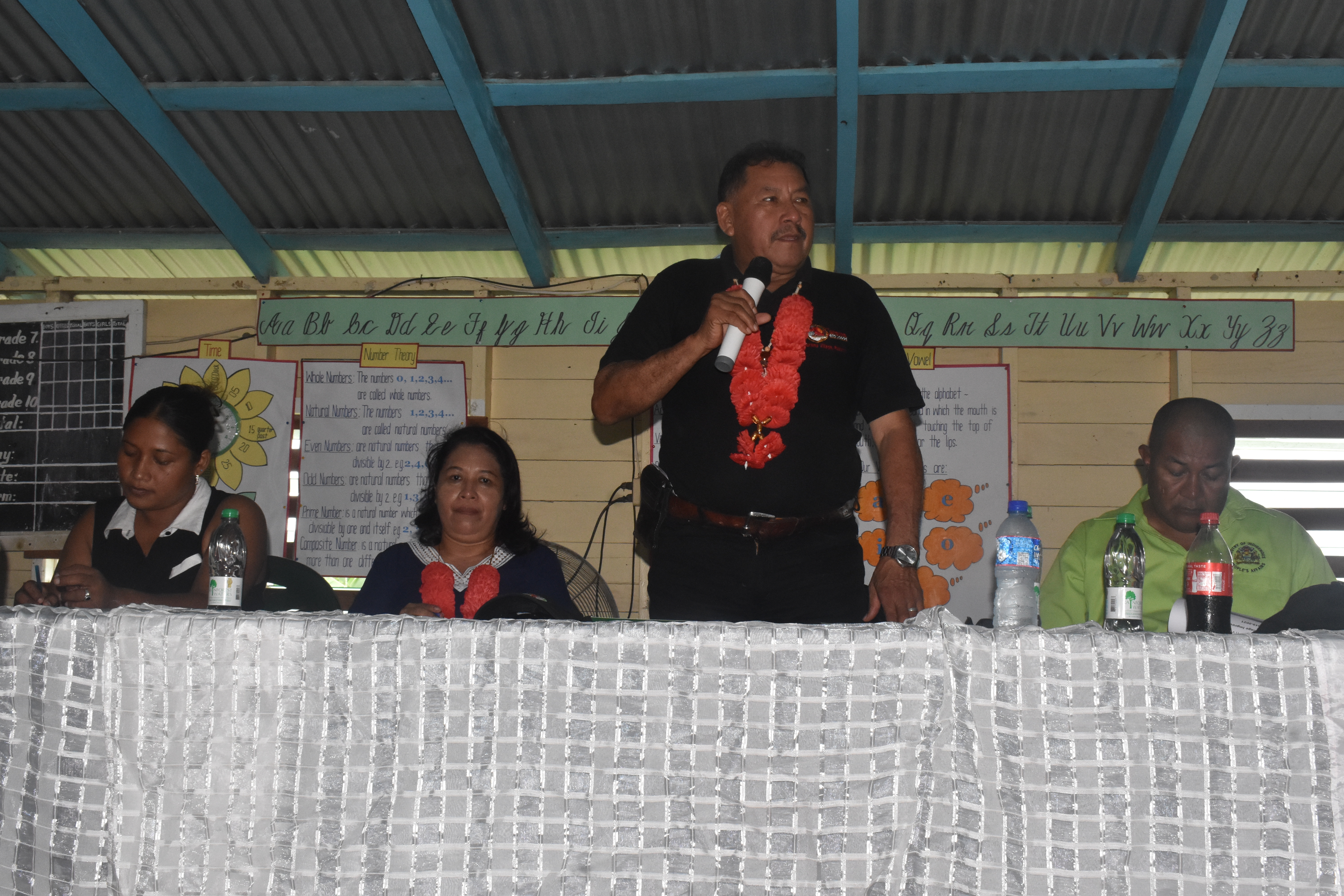 Residents were assured that Government intends to address the social and other ills affecting the village.

Minister Sydney Allicock said Government has recognized the many issues affecting the village but for changes to be realized everyone must “work together in achieving things, support one another with the aim of getting things right as we move forward…since Government has been supporting communities towards development”.

The Minister also encouraged the students in attendance that they “need to be in schools so that you could help this nation in its development”.

A section of the gathering attending the public meeting in Baramita, Barima-Waini, Region 1.

Highlighting the success of the life changing Hinterland Employment Youth Service HEYS Program, Minister Allicock said “in communities we have young people who are excelling which is very very good for the program. Some of them say when they started they were timid, shy and didn’t know what to do but with the training, I’ve learnt to become my own boss, I’m making my own money and putting it in my pocket, I’m using it to extend my business and I’m now employing other people, helping my family which are really, really good stories”.

The Vice President also encouraged residents to let their voices be heard by fully participating in the ongoing Revision of the Amerindian Act “which is expected to be completed by the end of this year”.

Meanwhile, Minister of State Dawn Hastings-Williams while addressing residents noted that “Baramita which means – Rich Village, and you are indeed rich in your culture, forest and other natural resources but you must know what to do with the riches you have”.

Addressing the social ills affecting Baramita Minister Hastings-Williams said “I know you have your issues which we together as a Government and your Village Council, the Guyana Police Force and all other stake holders, we will continue to work together to improve that situation”.

Minister Hastings-Williams also encouraged the students to remain in school and get a sound Education “since it is a vehicle for development, without an educated community and nation, we would go nowhere especially as times are changing you have to keep abreast with the changes that are happening around us because we now live in a computer literate society”.

The Village Council led by Toshao Sharmaine Rambajue has already completed the village’s ICT Hub and is now awaiting the instillation of the computers so that all interested villagers can become computer savy.

Touching on the imminent National Voter Registration Exercise, the Minister of State encouraged villagers to get registered since this not only ensures them voting rights, but access to an Identification Card which is a useful document.

Residents were also updated on President David Granger’s “3B’s Initiative” where some twenty seven Schools Busses are used to transport children to and from school on a daily basis, a number of Boats and thousands of bicycles which were all handed over since the program was initiated.

The Village of Baramita is among beneficiaries of a school bus which provides assistance to the more than three hundred and ninety students attending the Primary School.

Since taking office in 2015, the Coalition Government led by President David Granger has given priority to address the many social ills affecting the village of Baramita which has recorded a large number of suicides cases, drug and alcohol abuse, teenage pregnancy, among other issues, most of which were largely ignored by the previous administration.

To this end a Ministerial Task Force was established to address these issues and to date, significant strides were made with support from villagers, to tackle the abuse of drugs and alcohol which is recognized as the main cause of the afore mentioned issues.