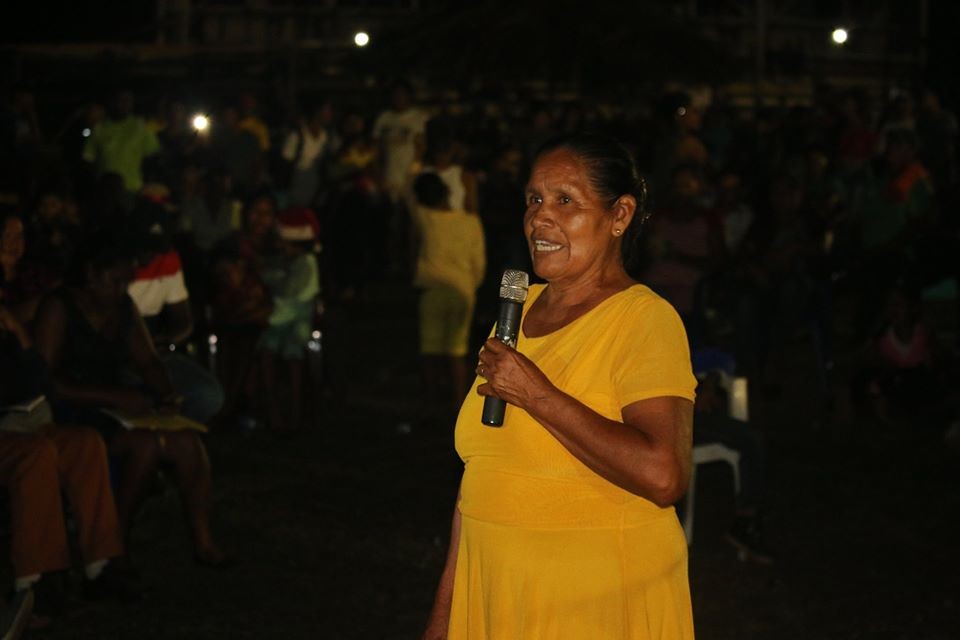 Was the moon an eyewitness, a sentinel or a participant?

On Saturday night, November 16, 2019, the moon stood majestically above a hillock in Santa Rosa, Moruca, spreading soft gold on an appreciative audience that had formed a huge semicircle witnessing the first Storytelling Festival in Indigenous Languages to be staged in Guyana.

This festival was designed to coincide with the UN declaration of 2019 as the International Year of Indigenous Languages. It was organized by the Ministry of Indigenous Peoples Affairs and attended by both ministers of that ministry, the Hon. Sydney Alicock and the Hon.Valerie Gorrido-Lowe who were suitably attired for the occasion and who were quite engrossed in the performances.

The moon held her own despite two glaring sets of floodlights, the crackling bonfire and scores of flickering screens of mobile phones. Each dark cloud she sent away with a silver lining so she may have full command of sky ensuring there were no drastic changes in the weather, using her celestial powers to   also maintain a coolness fueling the event, creating the correct atmosphere for storytelling. The climate for storytelling is important in setting the stage, bringing out the best and connecting to the rest. What is good ole time storytelling without a moon!

And it was good ole storytelling at its best for it was participatory – the crowd was into to it (act/action) from the first welcome rendered in their own language. That connection was established and maintained throughout the session and the circle tightened around the tellers becoming more intimate as forgotten and unused sounds, words and gestures were invoked – things the people can relate to and in this climate they openly embraced these innate qualities, enthusiastic to be identified with their own languages and their own stories and their own histories, pride swelling in their breasts. At times, the tellers did not own the stories so enthused was the ring of participants, supporting, challenging or correcting (I had ringside seat as one of the judges).

In this open air affair, many of the tellers were costumed each according to her/his particular nation, adding colour, charm and flair. Flair was important as both young and no so young beat their breasts in pride and stamped their feet with authority (yes, there were also many types of indigenous dance dramas in which the crowd participated with relish and enthusiasm). These were moments to cherish and build on.

Each item on the programme was designed to give a glimpse into a wide cross section of indigenous stories from different communities performed in the following languages  – Carib/Kali’na, Warrau and Arawak/Loko. So there were, just to mention a few items – the ‘Welcome song’ from Warapoka, a history of RC church by representatives of Santa Rosa village, the engaging story how Kwebana got its names and how to get rich by a member of  Kwebana community. How Kanaima was overcome performed by Santa Cruz, and the history of shell mound performed by Waramuri residences were two stories of triumph over evil that perhaps garnered the most enthusiastic crowd responses.

Even though  a few pieces were seemingly without plots or storylines, this did not take away from the performances, in fact, the pieces without plots served to underline the need for more research and data collecting and preservation and ultimately coaching sessions on how to present these stories in a structured form to the public – gems in need of polishing.

There were no bad stories however at times the storytelling craft was poorly executed, indicating the need not only of saving the languages but the need of preserving the stories through oral and written structured presentations.

On the fringes, there were groups that were not on the programme proper but were itching to take the stage. And it was on the fringes that I heard other just-so and how-so and name stories like how the moon got her dirty face, how Wakapoa got its name through a story loosely named ‘the moon sick girl and the watermumma’ – closely related to how Kwebana got its name, how the lazy man was cured which was not unlike one of the stories told in English and Creolese on how to get rich. Also on the fringes, I heard why honey is so scarce now and how Indians learned to paddle and with the piwari and fly flowing copiously, becoming heady, there were many intriguing stories about man/woman relationships.

The Moruca Storytelling Festival in Indigenous Languages was demystifying and magical at the same time akin to magic realism, a genre originated on the South American Continent and Guyana is part and parcel of such storytelling tradition which was put into practice on this occasion to good effect.

The Moruca Storytelling Festival in Indigenous Languages is only a beginning, another beginning to preserve the indigenous languages but this method of preservation through storytelling is the best form for now and it augurs well for the future.