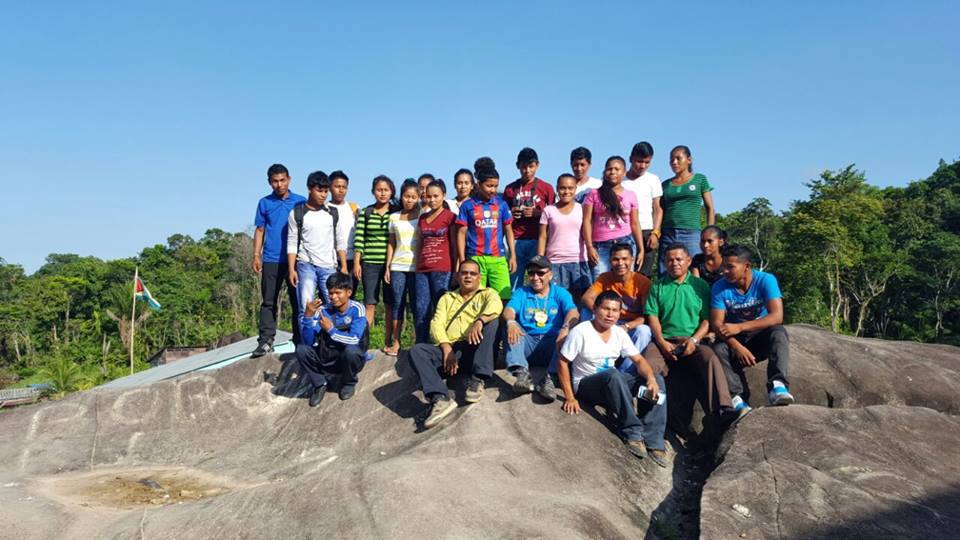 The renowned Harpy Eagle will be the flag ship image of Warapoka Village’s imminent Tourism Package when it is launched by the Guyana Tourism Authority and Wilderness Explorer at the World Trade Fair WTF this coming December in London.

The team in collaboration with villagers is currently preparing a tourism package to be presented at the WTF.

The mostly Warrou village of Warapoka which is located in the Moruca Sub-district, Region One is an emerging tourism destination with vast potential.

This was highlighted when Vice President and Minister of Indigenous Peoples’ Affairs Sydney Allicock led a team from the Ministry, the Guyana Tourism Authority and Wilderness Explorer there over the weekend.

Director of the Guyana Tourism Authority Indranauth Haralsingh who was on his second visit to the village believes the product is a remarkable one since conditions are conducive for tourism activities.

The GTA Head who was addressing residents during a community meeting said he is pleased to see that residents have shown this level of enthusiasm towards this initiative which he believes has the potential to yield resounding social and economic benefits.

He was particularly pleased to see the level of interest shown by the youths especially those actively involved in the Hinterland Employment and Youth Service HEYS Program from whom the tourism idea was birthed.

The youth there believe the Harpy Eagle siting is among the most unique species of Wildlife worldwide and according to them, the nest has been there for close to eighteen years and they believe another nest is somewhere close by, but is yet to be located.

The Harpy Eagle will be augmented by other keen areas of interest including experiencing the uniqueness of the spectacular shell mound rocks coupled with the breathtaking boating experience through rivers, creeks and savannahs.

Villagers, the GTA and Wilderness Explorer are certain the marketing strategy that will be employed will serve as an impetus to attract international and other tourists there and Haralsingh believes the WTF is the most appropriate forum to promote such an experience.

Meanwhile, Vice President and Minister of Indigenous Peoples’ Affairs Sydney Allicock explained to eager residents that hospitality is the basis for success in the business of Community Based Tourism.

Minister Allicock who himself is a pioneer in this field stressed the need for management of Eco-Lodges and Village Guest Houses to be mindful of the needs of tourists and adequately meet those needs.

The Minister said he was particularly pleased to see the initiative embraced by residents more so the youth who are the future of tomorrow.

The Minister pledged to support the village through collaboration with partners to provide the necessary training among other resources necessary in successfully executing this undertaking.

To this end, six persons from the village will be given a two-week opportunity to receive training in hospitality and financial accounting, exchange program regimen among other critical areas at the Rewa and Suruma Eco-Lodges in Region Nine.

Following this phase staff from the two Eco-Lodges will travel to Warapoka to assess and give support to the staff there to enhance their product delivery.

Another key area of focus will be First Aid.

Wilderness Explorer has already engaged Marcian Gravesandy who is a Head Nurse at the St. Joseph Mercy Hospital and who also continues to be supportive in offering her expertise in emergency medical response.

Additionally, Minister Allicock took the opportunity to hand over a Cassava Mill and a quantity of sport gear to the village, while Haralsingh also pledged to deliver a water pump for the village’s guest house.

Additional support is also forthcoming from President of the Tourism and Hospitality Association of Guyana THAG and Product Development Officer at Wilderness Explorer Andrea De Caries who also pledged to provide bed sheets and nets for the village’s guest house.

Warapoka which is located between Moruca and Mabaruma but on the Waini River and is home to approximately five hundred residents.

The Village’s Toshao is Newton Wilson.