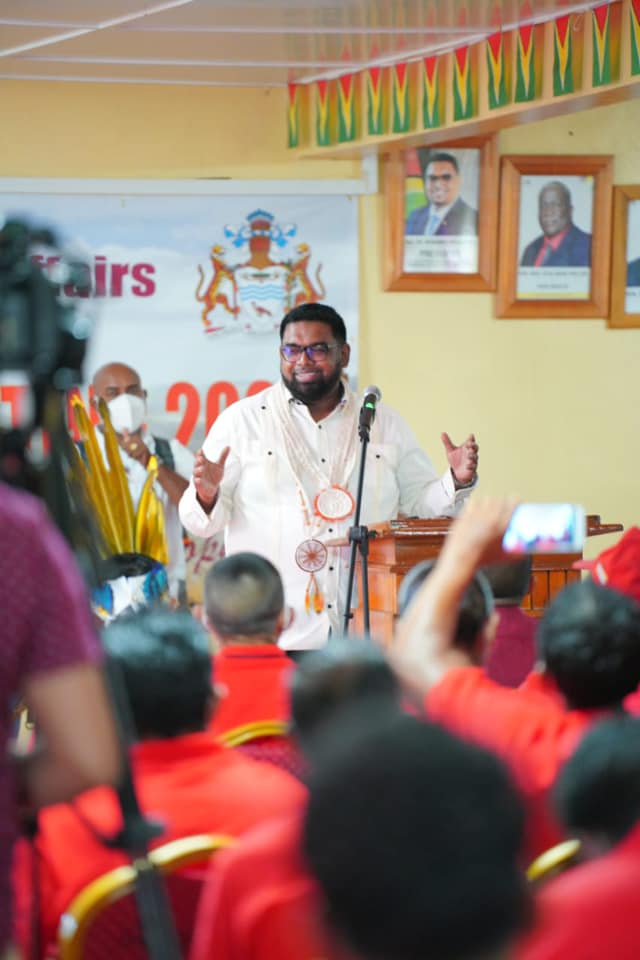 His Excellency, Dr. Mohamed Irfaan Ali says the impending wealth from the oil and gas sector will benefit all Guyanese equally.

The Head of State gave this assurance while addressing the Regional Toshaos’ Meeting in Region Nine on September 4, 2021.

“Let me assure you once again, that you would benefit equally from the resources of oil and gas in your communities, there will be no distinction. There are those who would want to have distinction, those who want to have a model that separates the class structure, under the PPP/Civic Government there will be no discrimination, all Guyanese will benefit equally,” he stated.

According to the president, there will be massive transformational development and consultations will be held with Amerindian communities.

The Head of State further reiterated that his government remains committed to “strengthening inclusion” in national development. He urged the Indigenous leaders to position their communities for greater development.

“I assure you that you will not be sidelined from the process of national development, but rather, integrated into that process.”

“My government is committed to strengthening our inclusion in national decision-making. We will engage with you continuously, and do so in a genuine spirit of inclusion. We will listen we have concerns addressed these the best of our abilities.”

President Ali also noted that Region Nine will become the heartland for agriculture, a vibrant centre for industry and trade, and a hotspot for adventure, sport, and nature-based tourism.

As part of precautionary measures to guard against the COVID-19 pandemic, Toshaos will be engaged regionally.

Due to the pandemic, the National Toshaos Conference has been canceled for two years now.

Nevertheless, the government is still making efforts to engage with Toshaos.

Speaking with DPI, several Toshaos expressed their gratitude to the government for the initiative to keep them engaged.

In addition, President Ali presented the Presidential Grant cheques to the Toshaos.

since the PPP/C government took office, the grant has been increased by ten percent.

Furthermore, The Head of State was accompanied by several sectoral Ministers.

(story modified from the Department of Public Information)