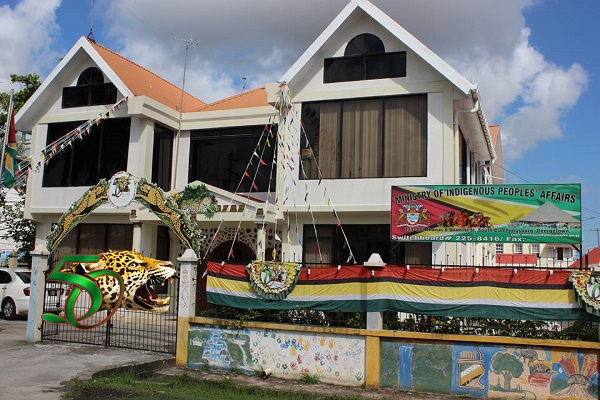 In excess of seven hundred million dollars will be expended for the execution of Amerindian Development Projects by the Ministry of Indigenous Peoples’ Affairs for hinterland villages and communities come 2019.

This followed the successful defence of the Ministry’s Capital and Current Budgetary Estimates in the National Assembly Monday last by Ministers Sydney Allicock and Valerie Garrido-Lowe.

This sum of two hundred and thirty million three hundred thousand dollars ($235,300M) will be invested in 215 villages and communities under the Presidential Grant program.

In 2019, in excess of one hundred and seventy six million dollars will be spent for additional support to the program. This will be in the form of monitoring and mentorship through cluster training to ensure best practices are employed and youth receive the prerequisite skills to effectively operate and manage their business to ensure growth and sustainability.

Of the sum, twelve million dollars has been budgeted for some two thousand youth to receive additional support through the acquisition of small grants ($50,000 each).

Meanwhile, the construction of a thirty eight million dollar Mall in Santa Rosa, Moruca, Region 1 is among other economic projects on the cards. This multi-year investment (3 years) is a 40’x60’ two-story building with some ten million dollars allocated in 2019 to assist the village in bringing this investment to fruition.

In 2017, ten of the eleven satellites merged their respective Presidential Grants to commence construction, while in 2018 all eleven villages came on board for the continuation of the project which to date has seen the completion of its foundation, columns and second floor completed.

Farmers have already commended land preparation as they eagerly anticipate the arrival of the beans to begin the germination process and subsequently planting of seedlings.

This multi-year project has seen ten million dollars budgeted for in 2018, with an additional ten million in 2019 which will cater for the construction and furnishing of the facility.

This two year project is value at sixteen million seven hundred thousand dollars, with ten million already invested in 2018 for the construction of the facility and start up, while the second year will see an additional six million dollars invested for the instillation of solar panels as well as additional funds for marketing of produce.

Warapoka Village, Region 1 is also air marked for support towards improving its community based eco-tourism initiative since the spotting of the much sought after Harpy Eagle.

The sum of five million dollars was allocated in 2018 for upgrades to two rooms at the Villages Guest House and the construction of a benab to accommodate the Village office and a Museum.A further two million dollars will go towards completing this venture which will also aid economic activities in the village.

Minister within the Ministry Valerie Garrido-Lowe during her presentation in support for Budget 2019 asserted that “for the past three years, since this Government took office, the Ministry of Indigenous Peoples’ Affairs has been focusing on building the capacity of our Indigenous and hinterland people. Your Government, does not believe in handouts. We believe in empowering people and giving them the economic support required so that they can create successful and meaningful lives for themselves”.

Minister Sydney Allicock during his Budget presentation emphasized that the vision of the Ministry over the next 20 years is to ensure that “all of Guyana’s Indigenous Peoples and villages and communities are empowered to have a better quality of life now and for future generation”.

The minister added that “Budget 2019 will undoubtedly continue to ‘transform the economy, empower the people and build sustainable communities.’

The House Monday last unanimously approved a $1.9B expenditure for the Ministry of Indigenous Peoples’ Affairs to execute its mandate to the Indigenous peoples in 2019.