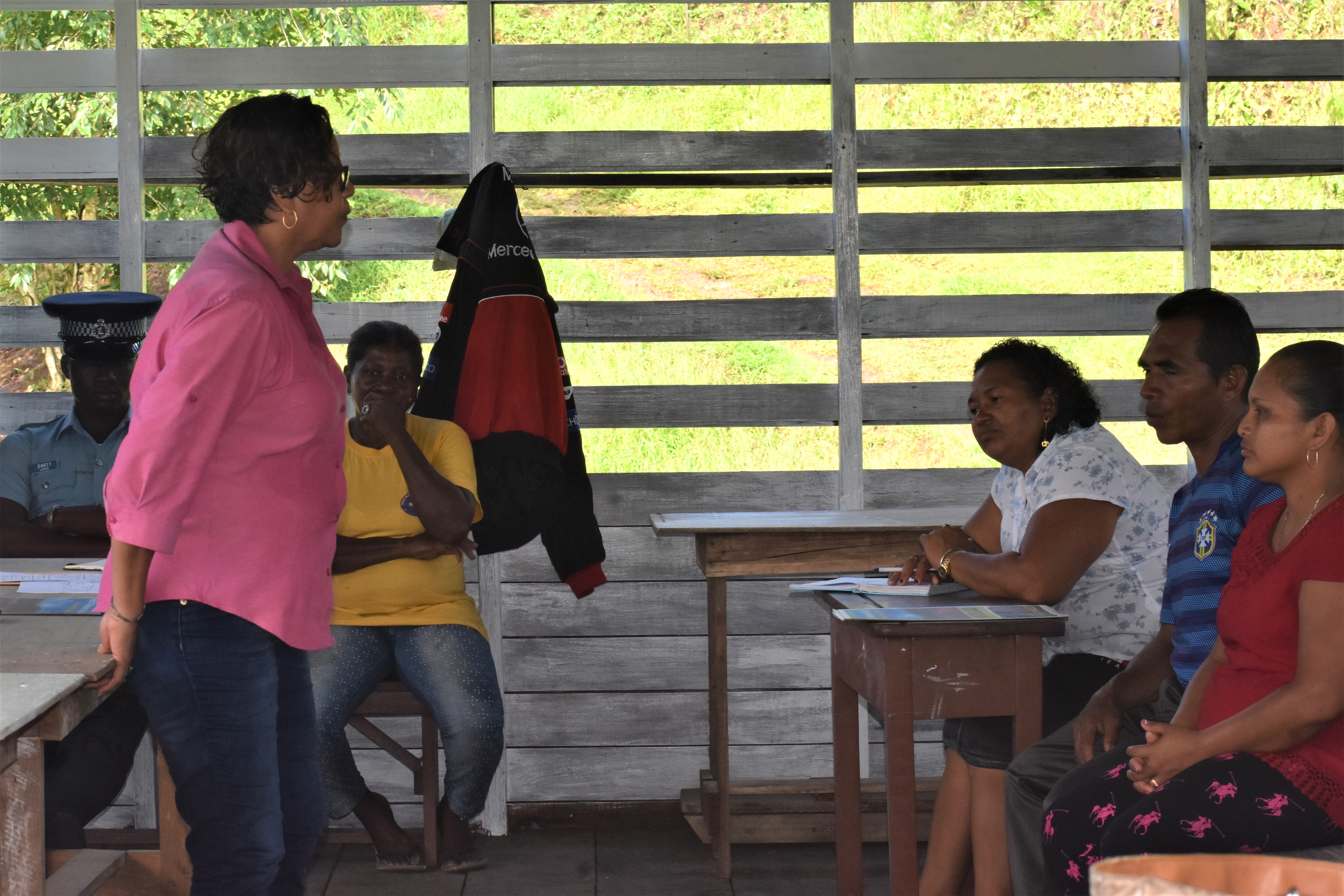 “Our friends who are looking for business opportunities, they will want to bring fancy fruit juice and fancy plantain chips in fancy packs and open business right here, but guess what, would it belong to us? And do you want that? So that is why we have to utilize our land and start looking at Agriculture as a Business. We have to start thinking that we can get rich off of Agriculture”, Minister within the Ministry of Indigenous Peoples’ Affairs Valerie Garrido-Lowe emphasized.

Minister Garrido-Lowe led a team to Santa Cruz, Moruca Sub-district, Barima-Waini, Region 1 on Sunday where fruitful discussions were held with residents as they venture into value added agriculture production.

A section of the crowd attending the Santa Cruz meeting

The Minister is ensuring Santa Cruz is fully prepared to become one of the most industrious Fruit Juice, Jelly and Marmalade producing village in Guyana.

With the expected benefits to be derived from the imminent oil sector, Minister Garrido-Lowe assured that “we will have enough people to eat what you plant and that is taking advantage of the situation, since Agriculture is one of the fastest growing sectors in the world.”

Guyanese Agronomist and Veterinarian and a son of the soil (Imbetero Community) Dr. Leroy Santiago who was also a member of the team, shared improved planting techniques with farmers which will be vital for future success.

Speaking passionately about the villages agriculture pursuits, Dr. Santiago said “you cut down a field and you burn the soil, why do you burn it? Because its tradition, our ancestors tell us we must do that .., you have about 12-14 inches of leaves that have fallen for hundreds of years – compost, another two feet of organic matter and when you burn that you get Potash (K20). So you plant the first crop you get a good crop. What you did, you kill the soil and then we want to know what happened to the rest of the crop”.

Meanwhile, recently sworn in Member of Parliament, Raynard Ward, who is also an Agriculturist by profession and a member of the team, also took the opportunity to interact with residents.

Twelve farmers were selected and will be planting one-acre land (each) of several variety of fruits.

Among the plantlets to be planted and fruit processed, packaged and marketed are cherry, orange, tangerine, lime, guava, pear, soursop, papaw, golden apple, pineapple and banana.

It is estimate that fruits will be ready to be harvested between eighteen months to three years by which time a factory will be established and fully operable.

Production will be done in keeping with international standards and Minister Garrido-Lowe has underscored Government’s commitment to continue providing the necessary support needed to ensure the project is sustained, villagers are gainfully employed, physical and infrastructural development realized and the goal of ensuring food security is achieved.

The Fruit Farm will complement Kwebanna’s Cassava Processing Facility, the Santa Rosa Ground Coffee Project both in the Moruca sub-district and the Smith Creek Fish and Crab Processing Facility in the Mabaruma Sub-district, all viable economic projects piloted by Minister Garrido-Lowe.

This will ultimately lead to poverty reduction which is on the front burner of the David Granger led Coalition Government.

Santa Cruz is home to more than four hundred residents who are involved in farming and fishing as its main economic activities.