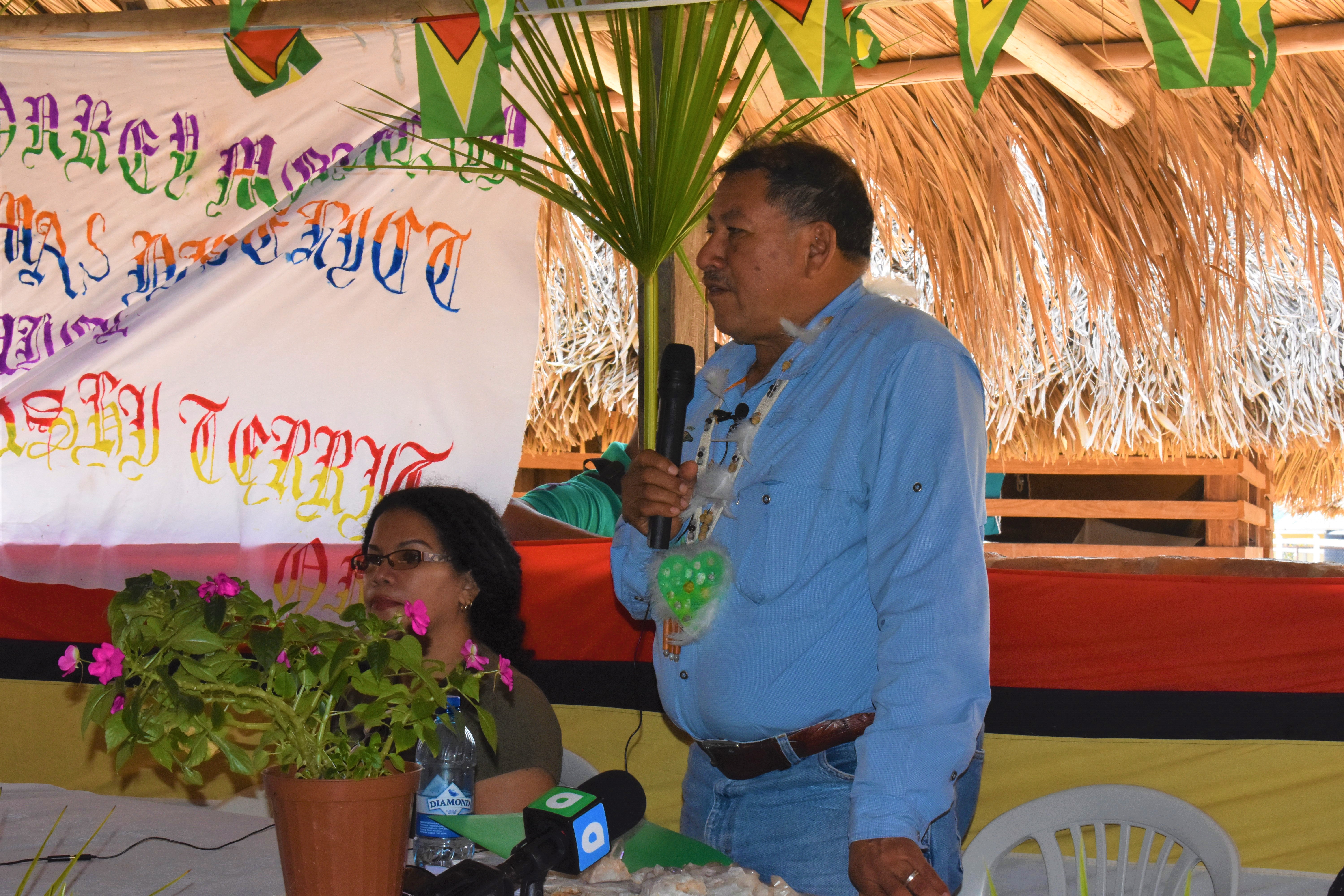 The NPDC meeting which was in its third day, saw Minister Allicock calling on village leaders to govern in the best interest of their respective villages and the people who elected them to serve.

Minister Allicock said villages continue to raise concerns about their Toshao’s as it relates to governance.

“You were put there because the people look forward for your support, they didn’t put you there to become lords and Gods and bosses and nobody can tell you anything, you become their servants, the servants of the people. You were placed there to give service to the people and not to abuse the power but to use the power in a way that all will be satisfied and accountability must be priority in your communities,” the Minister emphasized.

Focus, according to Minister Allicock is the key to development “so that people will be happy and can benefit as villages”.

The Minister encouraged leaders to get into the business of developing industries whether it’s in Agriculture or Tourism sectors so that their respective economies can be transformed thus improving the lives of the people.

Minister highlighted efforts of three women in Annai, Region 9 who started producing coconut, lemon grass and crabwood oils and although it took years before acquiring a real income, they remained committed and today with support, is producing the Rupununi Essence a facial line that continues to make waves across the country.

Pointing to Monkey Mountain which will soon begin producing jewellery from semi-precious stones to meet international standards, Minister Allicock encouraged villagers to fully support this initiative since it is geared at ensuring economic and other improvements.

Villagers from Monkey Mountain and neighbouring villages will supply the lapidary workshop with a variety of semi- precious stones an income generation mechanism for their respective families.

The building to house the lapidary workshop is ninety five percent completed and will soon be commissioned, which is the second step to guaranteeing the good life promised.

Ten youth from the village travelled to Boa Vista in neighbouring Brazil and successfully completed a Lapidary training course and they are now equipped to operate the facility.

Emphasis was also placed on developing the respective Village Improvement Plans (VIP’s) which will serve as a guide for further development and leaders were encouraged to consult with villagers as soon as possible to get this plan on paper and into action.

“The VIP is to help you to be economically strong and take management and control in your own hands you could be able to develop cottage industries that will bring in the money needed, so come up with your plans that will make you better off, now is the time to do that”, Minister Allicock challenged.

Indigenous lands have and will continue to be an issue but Government is committed to addressing the many challenges faced. The Minister pointed out that “indigenous lands will never go off the radar and we at the Ministry is working towards establishing a unit to deal with land issues”.

He noted that sadly the Land Commission of Inquiry proposed by President David Granger did not receive the blessing of several organizations including the National Toshao’s Council and was subsequently put on hold “and we have not been able to move that process forward as we would have wished to, but I’m hoping that we could continue getting ourselves in order”.

Updating Toshaos on the status of the Amerindian Land Titling Project, Minister Allicock said the Ministry and the United Nations Development Program (UNDP) had requested an extension for the project from Norway and is currently awaiting a response.

Toshaos were also updated on the current political situation following the No-Confidence Motion passed in the National Assembly last December and the recent ruling of the Court of Appeal that the Motion was invalidly passed.

The Vice President noted that while the matter is now engaging the Caribbean Court of Justice (CCJ) which is the highest court in the Caribbean jurisdiction, Government’s work will continue.

“We would like each village to receive funding so that they can get on with their work and the happiness of their people, this is your focus and your development and remember your people are looking up to you for doing the very best for them” he assured.

They were also told about the resignation of four Government Ministers who hold dual citizenship status. He thanked the Minister for their service and commitment to national development and is confident, President Granger will make decisions moving forward that are in the best interest of all Guyanese.

Moving forward, the NRDC will be looking to follow in the footsteps of other District Councils in Region 9 to have that body duly recognized and will be moving to have it gazetted and Minister Allicock has committed to assisting this process.

According to Chairman of the Council Clifton Perrieira (Toshao of Kato Village) in 2019, will be working closely with the Ministry as it relates to consultations ongoing on the Amerindian Act.

He said the NPDC has already submitted its proposal for the changes it would like to see made to the Act and is eagerly awaiting the conclusion of the consultation process and the changes ratified so that the indigenous people will have updated and flawless laws to govern well into the future.