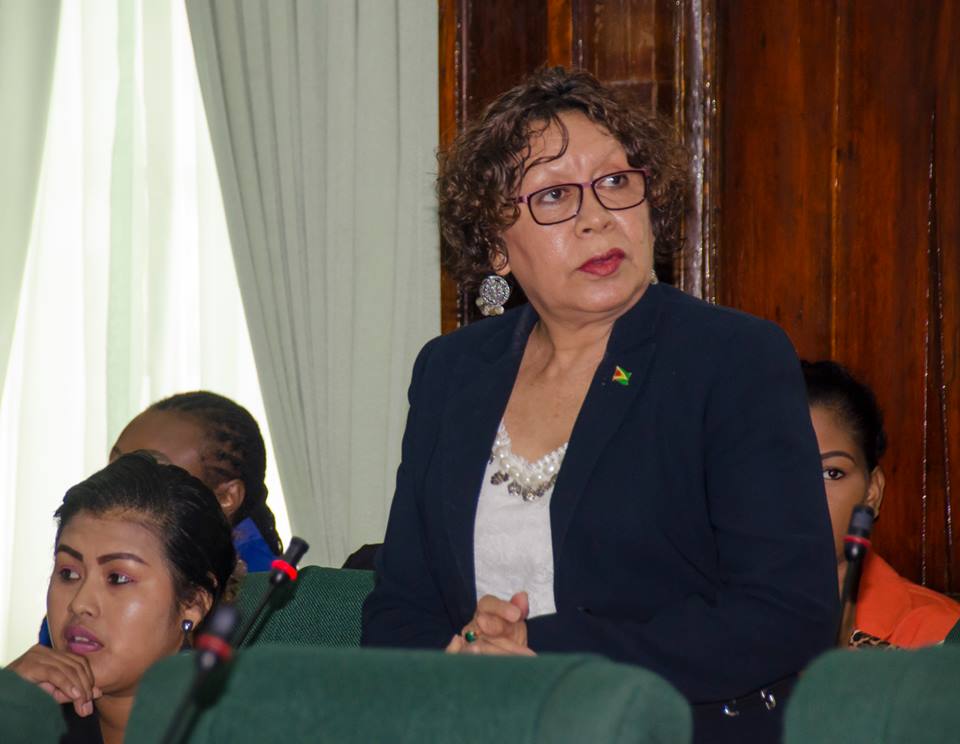 “Building a diversified, Green Economy, delivering the good life to all Guyanese” was the mantra as Minister within the Ministry of Indigenous Peoples’ Affairs Valerie Garrido-Lowe stood poised in defense of the 2017 Budgetary estimates in the National Assembly in early December.
Minister Garrido-Lowe during her budget presentation said “it is creative.. which will serve Guyana well, since it is critically important for us to pursue policies that will boost economic growth and improve the lives of ordinary Guyanese”.
According to the Minister come next year much will be in store for the Indigenous community as she pointed to several initiatives that will be undertaken including the pursuit of renewable, clean and cheaper source of energy.
“To this effect, $264M is budgeted for the first ever large scale solar farm in the hinterland town of Mabaruma where 3000 residents will benefit from an additional 17 hours of electricity. The hinterland town of Lethem, Mahdia and Bartica will also benefit from 800 kilowatts, 400 kilowatts and 1.5 megawatts respectively, the Minister opined.
The Moco Moco Hydropower Development Project in Region 9 will also be refurbished which according to Minister Garrido-Lowe “will feed power into the Lethem Power Company grid thus bringing more reliable electricity support to the growing town.”
Speaking to the imminent developments in the Education Sector Minister Garrido-Lowe pointed to an increase in the number of awardees for Hinterland Scholarships.
“The Hinterland Scholarship Programme will be expanded to provide for 530 students, moving up from the present 510 students. This will allow for more to progress to tertiary institutions thus affording more Indigenous and hinterland residents the opportunity to vie for public sector and private sector jobs. Seventy eight students wrote CXC and secured a pass rate of 83.3% while nine students wrote CAPE and secured a pass rate of 90%,” the Minister acknowledged.
In the area of extra-curricular activities ongoing at the student Dormitory the Minister who has direct responsibility for Children, Youth and Women development stressed that “our hinterland students presently housed at the Lilandaal Dormitory, are learning to sing, play chess and scrabble. Hon. Member, Ms. Pauline Sukhai should be pleased about this. The intention is to keep the children gainfully occupied and it is also hoped that chess will help them to do better in Math and scrabble will be able to help with English language.”
Focusing her attention on Information Technology Minister Garrido-Lowe recognize that “we have to be tech-smart to keep abreast with the rest of the world; hence, Smart Guyana will touch every major sector of our economy…. This is revolutionary for the hinterland… I would like the Minister of Finance to know that I am extremely happy about this – and added to the 150 individuals targeted for training in graphic design, programming, office tools, etc, I will be offering, free of charge, graphic design and office tools tutoring to some hinterland villages as my time permits, in preparation for the Government’s certification course.”
Another key area of focus by the Minister was the continuous support towards the Hinterland Employment and Youth Service HEYS Program and the numerous success stories recorded during the past year.
One such notable development highlighted by the Minister is“the sun-dried organic tomato project I spoke about in the 2016 Budget is being implemented. This is a sustainable business that will benefit the entire North Pakaraimas, and is in sync with the 2030 sustainable goals.”
In 2017 some $M991 was allocated for the HEYS Program which targets one thousand additional youth from across the Hinterland.
Minister Garrido-Lowe has the interest of the children and women folk under wings, and during today’s debate presentation indicated that “the Ministry of Indigenous Peoples’ Affairs supported two hinterland women’s group in 2016 – the Marigold women’s group in Santa Rosa, Region #1 and the Kanapang women’s group in Region # 8. The chickens are alive and well and I am proud to say that the Marigold group will have eggs for the New Year.”
Additionally, “a Study of Indigenous Women and Children is also being done by the MoIPA in collaboration with UNICEF. This is the first time such a study is ever being done and it will serve to inform and guide organisations/agencies on suitable Programme designs for our indigenous women and children,” the Minister emphasized.
Among other areas spoken to in her presentation were the services offered by the Ministry to patients by way of financial assistance for surgeries, CT scans, MRI’s, assistance towards funerals, an increase in Old Age Pension to nineteen thousand dollars monthly, maintenance to the hinterlands existing road network and the much touted establishment of four more radio stations to the tune of $M150.
According to the Minister “the APNU+AFC Government will do what it takes to bridge the information gap between the hinterland and the Coast.”
The 2017 Budget Estimates totaling $250 Billion was presented to the National Assembly a week ago under the theme “Building a diversified, Green Economy: Delivering the Good life to all Guyanese.”