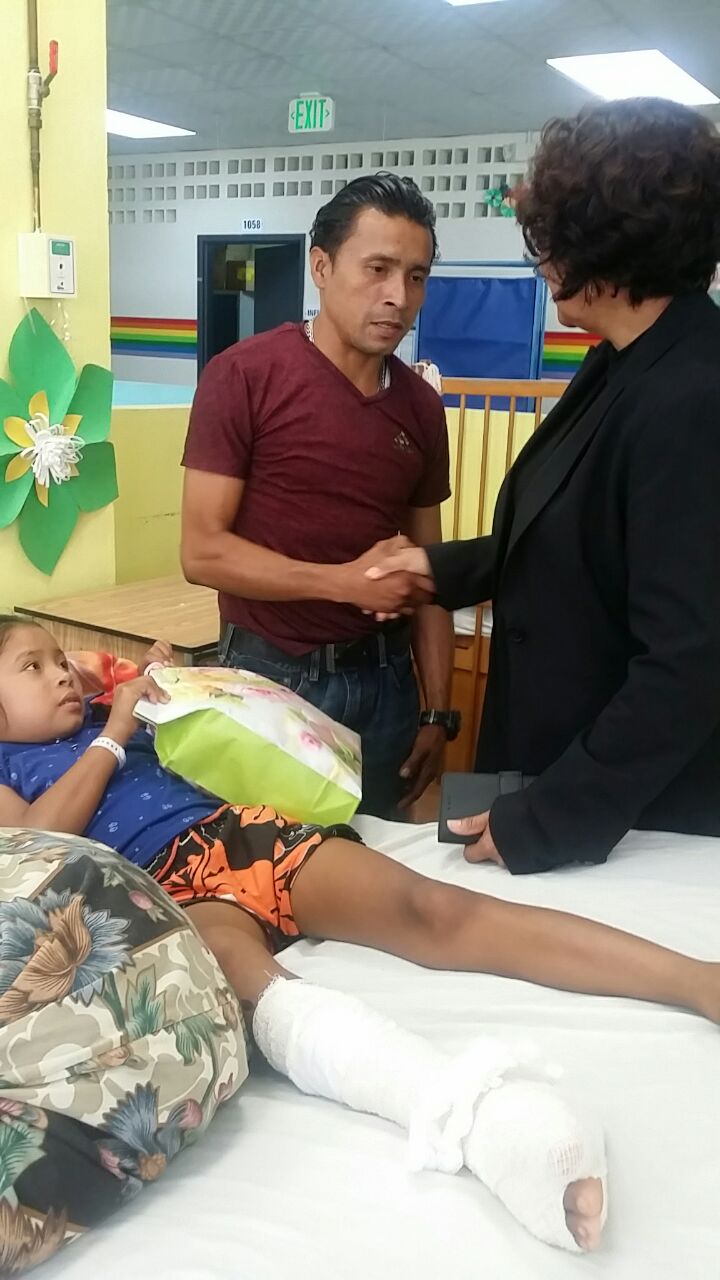 Minister within the Ministry, Valerie Garrido-Lowe, and team visited the medical facility where she brought smiles to the faces of all the children there including two cancer patients.

Last year, Minister Garrido-Lowe made several visits to the pediatric ward and presented them with hampers.

Following the well-intended visit the Minister noted the ages of some of the children and expressed sadness that they were hospitalized rather than enjoying childhood at this point.

However, she was pleased to note that “they are fewer children on the ward because on my previous visit they were so many children and I ensured that I saw all of them. I am also happy to see that the well cared for by the nurses who are also very patient and friendly.

The Minister also thanked the Deputy C.E.O “for accompanying the team”.

Minister within the Ministry of Indigenous Peoples’ Affairs Valerie Garrido-Lowe meets a patient of the Pediatric Ward of the GPHC.

The Minister committed to returning shortly with additional presents among them coloring books crayons, reading books and educational materials.

Twelve year old Mark Luke who had just returned from surgery carefully thought out his request after being asked by the Minister what he would like to have.

Narrowing his eyes for a moment, Luke confidently responded that he would like to be the owner of a remote control Helicopter. Minister Garrido-Lowe promised to deliver on his request at the end of the month.

Minister Garrido-Lowe also met Mr. Gilbert Alexander the father of the eight year old child, Alicia Alexander, who was bitten by the snake from Region One.

Gilbert who is a single parent spoke of some of his challenges, one of them being his daughter’s education. He was promised educational materials which Alicia would use to learn to read and write as well as an educational toy (tablet) which will further assist in her development.

Minster also met Kosiah Crighton who developed a tumor in the head. He is being cared for by his aunt since his mother could not be present with him in the hospital. Kosiah is at the facility for more than a month. The Minister also pledged to provide support for Kosiah.

Meanwhile, Deputy Chief Executive Officer Elizabeth Gonsalves said the institution is pleased with Wednesday’s visit and commended the Ministry for its continued support.

“It’s a very good gesture to reach out to the kids, because when kids are hospitalized it’s a lot different to when adults are, it’s not only that they are uncomfortable, but their freedom is taken away also. We know how kids like to be active and they now have to be restricted to a bed and I feel for those children, so anything that comes to brighten their day is always something worth doing’ the Deputy CEO explained.

As a health practitioner the Deputy CEO said “I know that the keids were happy, the parents were happy and we at the Hospital are also happy that people care about what is going on here”.

Meanwhile, Minister Garrido-Lowe has direct responsibility for Welfare and Health of the indigenous people.

When the David Granger led coalition Government took office in 2015, the Department under Minister Garrido-Lowe’s guidance began conducting scheduled visits (thrice weekly) to the institution which ensured regular support, financial and otherwise, is given to persons in the medical facility.

In 2018, in excess of $12M will be spent for financial assistance to the nation’s first peoples.