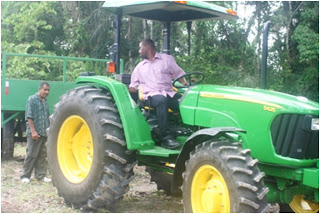 On Thursday, January 31, 2013, Hon. Pauline Sukhai, Minister of Amerindian Affairs, accompanied by a team from the Ministry travelled to Kimbia Village, Region # 10, where she commissioned a tractor. The tractor will be utilised to enhance agricultural activities in the Village.

Kimbia is located in Region # 10, approximately 72 miles (up the Berbice River) from Rosignol, Region # 6 and 52 miles from Kwakwani in Region # 10.

The community has 80 households with a population of 310 and a health centre, and a primary and secondary school. The latter is owned by the church.

Kimbia has benefited from support from the Amerindian Affairs Ministry through Presidential Grants and other initiatives.

Minister of Amerindian Affairs Pauline Sukhai hands over the keys to the tractor to Mr Lindee, Toshao of Kimbia

The tractor was provided following a request by the community two years ago. Minister Sukhai explained that when requests are made, it goes through a budgetary process, which is then included in the Amerindian Affairs Ministry’s Capital Budget requests to the Ministry of Finance. She added that not all requests are granted by the Finance Ministry since the other Ministries also make requests. It is therefore essential that the community prioritizes its needs.

The tractor costs approximately $10M and therefore it is expected that it will be used in a sustainable way and a cost recovery management plan discussed at the community level for fair and reasonable pricing of the jobs done by it. The community’s council will have to identify a few people from the village to form a management committee which is responsible for reporting on the tractor’s use and management.

The Minister illustrated that Kumu Village, Region # 9 received a tractor almost two years ago and the vehicle looks new because the community has a brigade of youths charged by the village council to clean up the vehicle following each job. That brigade is led by a female and they also engage in other community tasks. Minister Sukhai urged the community to encourage the spirit of volunteerism.

During interactions with the residents at the Kimbia Primary School, Minister Sukhai applauded the teachers for allowing the school children, of all levels, to participate in the discussions.

Minister Sukhai emphasised the necessity for young people to start integrating in, and understanding the dynamics of their communities, and to be aware of their responsibilities towards their village. “The Government of Guyana, I must say, is one that has always been inclusive and I say inclusive because the Ministry of Amerindian Affairs was specially set up to address Amerindian affairs, but many of our indigenous people are also located and living in settlements and communities that are mixed. They coexist very peacefully with all other ethnic groups in some of the riverain communities…and our focus has never been on only focusing on one particular ethnic group in any one village…,” the Minister said.

Minister Sukhai expressed satisfaction that the 2007 presidential grant was utilised to build the village office however; she was not so inclined with the progress of the 2008 grant which was used to cultivate beans.

“With respect to our financial status… it is very important for our government to ensure that the small investments we make for the betterment of villagers and their community are used in the best possible way and that sustaining those interventions should be seen as important by the people who are expected to benefit from those interventions,” the Minister stated.

Kimbia’s 2009 presidential grant was used to purchase a 48 HP engine and a boat and the 2010 and 2011 grants which amount to $2M is earmarked to purchase agricultural implements to assist the community.

With regards to the Community Development Plan, Minister Sukhai noted that the proposal submitted by the community to purchase a truck that will aid in the transportation of produce to the market has been assessed.

The Minister shared this bit of information because it has been found that while villages’ proposals are submitted, some villagers are unaware of them. With this in mind, Minister Sukhai stressed that the Ministry requires community participation and approval in the decision making with respect to each proposal submitted.