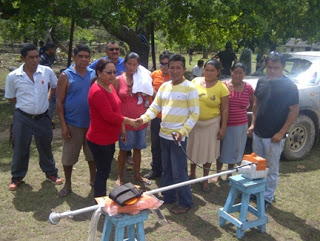 conference, where the Hon. Pauline Sukhai, Minister of Amerindian Affairs, accompanied by Nigel Dharamlall, Permanent Secretary and the various heads of department of the Ministry provided a review on the successes and challenges of the Ministry in 2012.

The National Secure livelihood Programme (NSLP) is a project initiated by Government with the main objective of securing livelihood for Amerindian villages and hinterland communities, especially in Region One where it was piloted.

A fish pond in Region One

Agricultural projects such as aquaculture, crab fattening, honey and the cultivation of organic pineapples were implemented in fifteen communities in Region One. The NSLP also sought to provide employment opportunities, sustain food security and generate income, through the economic diversification and introduction of new farming techniques in the communities.

Minister Sukhai noted that farmers are much energised to get back into organic pineapple cultivation since the 39 acres pilot which they cultivated, produced and are ready for the trial run at the pineapple factory in Region One. The factory has been organically certified for production and the farmers’ cultivation plots have also received organic certification.
Despite some setbacks, the production of honey has been successful. Communities complained about the difficulties they encountered in maintaining permanent bee hives, but the ministry has constantly been assisting in rebuilding them. Additionally, crab wood oil and cassava products did well under this programme. On display at the conference were crab wood oil products, such as hair creams, soaps, and oils that were produced under the programme.

There were some challenges, especially in the aquaculture and crab fattening and processing projects. These challenges were not in production, but rather in the sustainability aspect of the projects namely because crab is seasonal. The ministry is in the process of seeking additional technical assistance for the sustainability of these projects.

The ministry has engaged the Food and Agriculture Organisation (FAO) and Inter-American Institute for Cooperation on Agriculture (IICA) in this regard. The organisations have expressed a willingness to provide technical assistance for the sustainability of the projects.

Tobago village, as part of this programme had set up an aquaculture farm in the community however, there were some challenges with stocking of the ponds with fingerlings. The ministry has already identified the areas to be tightened up, and has been working with the National Agricultural Research and Extension Institute (NAREI) with respect to the fingerlings that have to be replaced in the ponds.

The ministry will continue to work with the farmers to overcome the challenges that would arise overtime for the continued success of these programmes.

In 2012, the ministry was provided with two years of presidential grants, which were used to support the financing of community based socio-economic projects in hinterland communities across the ten administrative regions of the country.

Presidential grants assisted in purchasing this tractor for Malali

About $241M of the $323M which was allocated for the 2011 and 2012 tranche of the programme was used to fund projects in the production, transportation, social and agricultural sectors, namely the construction of village shops, passenger, cargo and fishing boats, mini buses, tractors and ATVs to improve life at the village level.

As part of the Ministry’s initiative for 2012, the Ministry undertook enhancement works at the Hinterland Student’s Dormitory at Liliendaal. The project saw the clearing and land filling of the Dormitory’s compound to cater for the development of the environment that will support extra circular activities for the students.

Minister of Amerindian Affairs Pauline Sukhai told the media that the Ministry has begun works to the value of $12M on the facility’s compound to enhance its external surroundings. She explained that the external works are being done so that cultivation by hydroponics method can be employed at the dormitory, and that the children could learn to employ this technology.

The Dormitory at Liliendaal accommodates the hinterland scholarship students pursuing studies in Region Four. Constructed at the cost of $95.4M, the dormitory has an auditorium, a library, a computer laboratory and caters for accommodation of about 120 students.

The Minister highlighted that the hinterland scholarship programme is a commendable one and pointed out that the Ministry will continue to provide hinterland and Amerindian students with scholarships once they qualify.

In 2012, sixty two students attending secondary and technical institutions graduated from the programme. There was a recorded pass rate of 86% among the 40 students who wrote the Caribbean Secondary Education Certificate Exams (CSEC) in 2012. This demonstrates that once given the opportunity, which may not have otherwise been afforded through a scholarship that Amerindian Students can excel.

The Ministry also executed the Hinterland component of the Government’s School Uniform Project. This project involved the procurement and delivery of School uniforms to children in Hinterland and Amerindian Communities and is in keeping with Government’s policy to ensure that no child is left behind and is afforded an equal opportunity to attend school.

In 2012, the Ministry of Amerindian Affairs expended approximately $76M on the procurement and distribution of school uniforms in Hinterland and Amerindian communities. This exercise benefited some 30,000 students attending nursery, primary and secondary schools in Regions 1, 7, 8 and 9.

Approximately one hundred community outreaches were done in 2012, both by the Minister and officials of the Ministry. These outreaches help the ministry to gain firsthand knowledge and understanding of the concerns and issues in Amerindian communities. It also helps the Ministry to better plan strategies and policies to mitigate issues which may arise in the Villages. 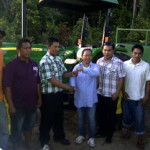 Minister Sukhai hands over the keys for a Tractor to Toshoa of Katoka Village, Region # 9 during an outreach (2012) 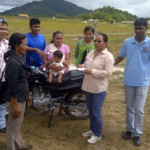 Minister Sukhai hands over a motorcycle to Senior Councillor of Rupertee, Region # 9 during an outreach 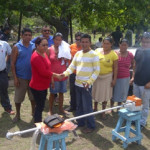 As the focal Ministry responsible for protecting and promoting the social and economic rights of Amerindians, the Ministry also addressed several welfare issues in 2012. Minister Sukhai reported that the Ministry of Amerindian Affairs did not receive any reports of Trafficking in Persons in 2012. However, there were several other welfare cases which were addressed and referred to the relevant agencies for investigation and action.

The Minister highlighted that the Ministry plans to continue some of its current programmes in 2013, while it seek to embark on new initiatives that will continue to support the improvement and development of Village economies in 2013.