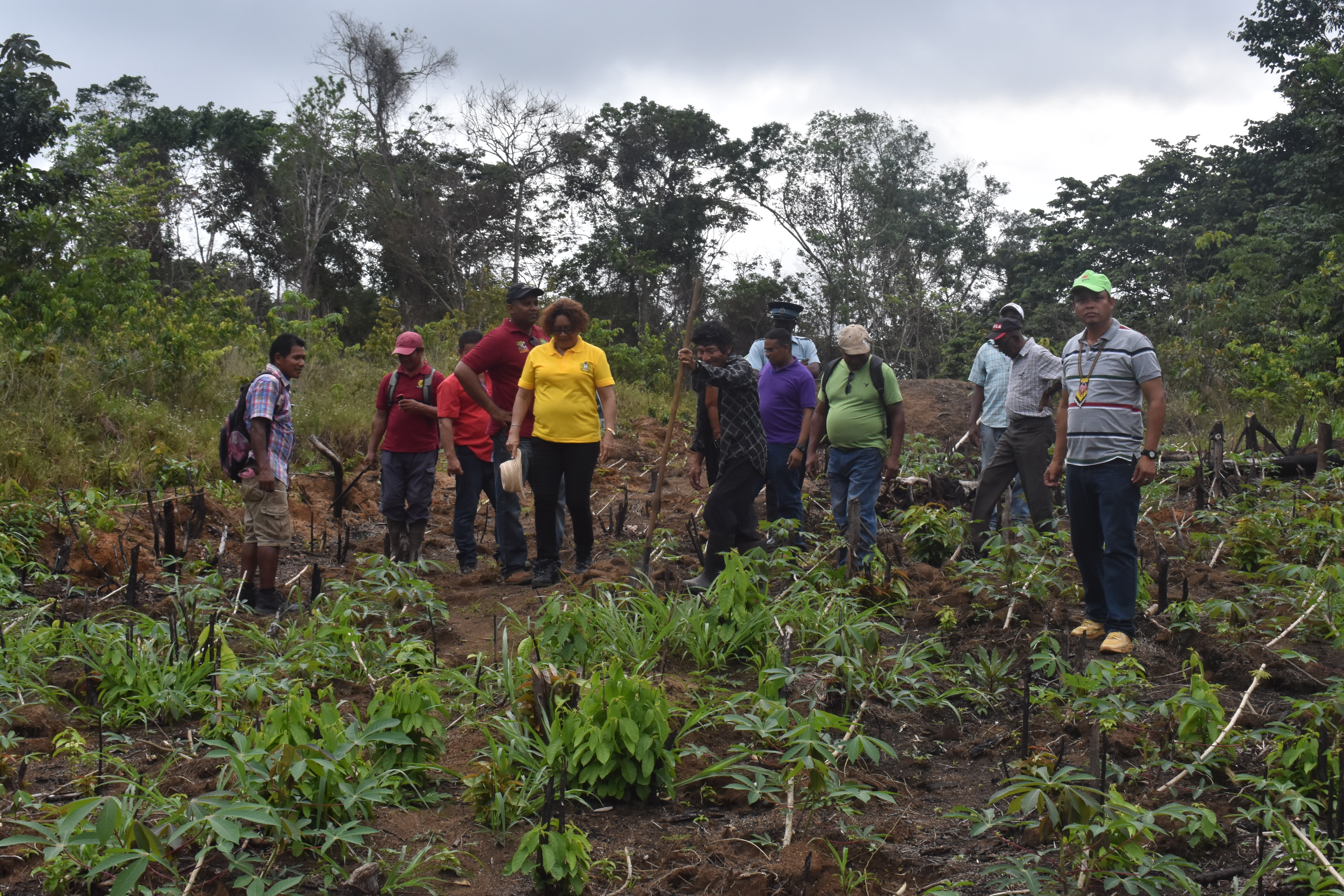 Minister within the Ministry of Indigenous Peoples’ Affairs, Valerie Garrido-Lowe, led a Team to Moruca Sub-district, Barima/Waini, Region # 1, for a Technical meeting with close to fifty farmers there.

The two-day engagement which commenced on Thursday saw the Ministry partnering with the National Agriculture Research and Extension Institute NAREI and Brazils Stem Integrated Production in Agribusiness, SIPA, to share technical knowledge with farmers who will soon be engaged in the production of Ground Robusta Coffee and Cassava Flour to supply first the local market and later the international market.

Some fifteen farmers from Santa Rosa Village (farmers will benefit from eleven satellites) will be engaged in the Coffee project, while thirty five (35) will be involved in the Cassava Flour Project in Kwebanna, both of which are organic in nature.

The team visited seventeen farms in the area over the two day period and was able to engage farmers and provided the technical knowledge as it relates to planting technique and pest control which will vastly improve the percentage of yields they currently enjoy.

Inter-cropping with the several species of legumes were encouraged as a means of replenishing soil nutrients that would have been lost during cropping season.

Minister Garrido-Lowe, who is the brainchild behind these family oriented projects in the respective villages, say the intention is to ensure these planned initiatives are economically viable since they will be value added products.

“The hinterland has great prospects in agriculture and tourism and our people are willing to work to raise their standard of living and they are not afraid to try new things. The Pakaraima Flavours Sun-dried Tomato Ketchup is testimony to that fact; our people are hardworking and when they make up their minds to do something for their benefit, they can deliver for themselves and others. All they need is the financial support which Government has already committed to, for both the cassava flour and the ground coffee production, the technical assistance in the farms and, of course, training in the value-added process. My job really is to put things together and to motivate them, and believe in them… so I get easy job.”

Meanwhile, NAREI’s Researcher, Premdat Beecham, following the visits to the farms asserted that based on observation the Government is moving in the right direction.

“We need to move in that direction since value addition is one of the most important things because we cannot do without adding value to it and taking into consideration the schools feeding program and taking into consideration the limited resources that we have in terms of commodities going into these areas; the 60 percent wheat flour mixed with the 40 percent cassava flour is one of the main products that will go to these schools feeding programs and even the army and police can take advantage of this program”.

He added that based on what he has seen in Kwebanna “they are equipped to deal with this and the Honorable Minister has made pretty good strides and I can guarantee that this will be a success since we at NAREI will do our best to support this initiative since it is very important for national development”.

SIPA’s Consultant, Carlos Alberto De Medeiros, is confident that both projects will succeed since the climate, the work force and of course the government backing them is very important for this project and the government has made that commitment”.

“We have several ways of controlling Acoushi Ants by planting trees that they don’t like and that we don’t have need for (neem plant) or by using the coconut couscous. I think a good thing is to encourage the farmers to utilize more of their coconuts there”.

Soil samples were collected from each farm and according to Mr. Beecham, a complete analysis will be conducted and results as well as recommendations will be forthcoming shortly.

Meanwhile, both projects will be operating through a coop society.

Nikita Williams, a Co-op Officer in the Department of Cooperatives, an established entity under the Ministry of Social Protection, underscored the importance of Co-operatives and the vital role they play in fostering economic sustainability of projects in the respective villages.

“A Co-op really is body of members who voluntarily come together, pooling their resources to develop their social and economic development and this will be good for Kwebanna since you will be venturing into an economically viable business on a large scale,” Williams assured.

A similar sentiment was shared when the Co-op was being established in Santa Rosa for its Ground Coffee Project.

Villages are encouraged to establish co-op societies and the Ministry of Social Protection continues to work with groups desirous of attaining status as a Co-operative Society.

Persons desirous of forming co-ops must have at least seven non-related persons in the group, is expected to complete and submit an application form and other relevant documents, customer due diligence, promotional work with group, submission of a five year business plan and must register.

The Moruca sub-district is strategically positioned to realize significant economic gains and the Coffee and Cassava Flour projects will be among other sustainable initiatives to change the trajectory of the lives of residents.