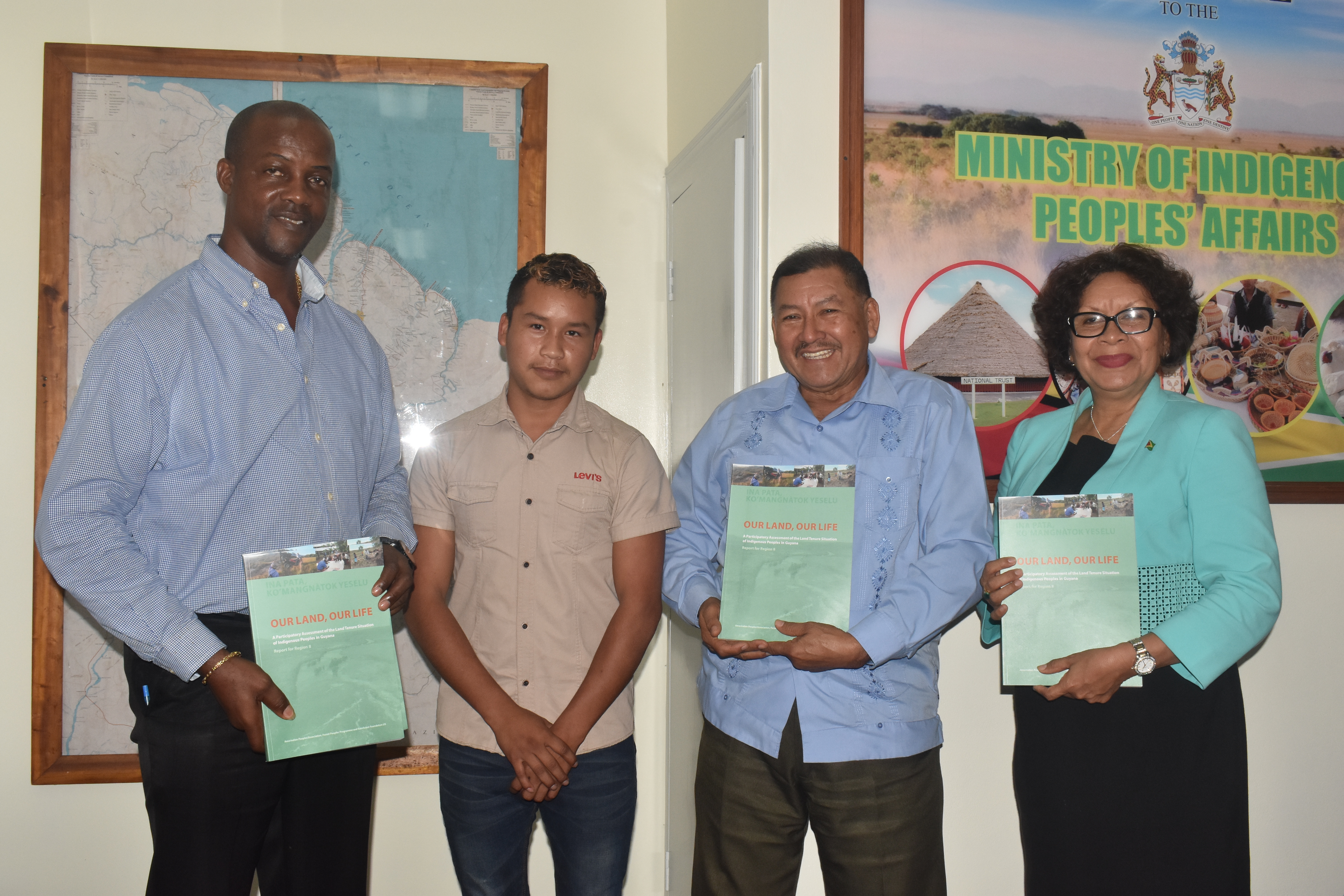 Communities in the North Pakaraima, Potaro/Siparuni, Region 8 have completed and presented to the Ministry of Indigenous Peoples’ Affairs a one hundred and forty eight (148) page report on findings from an assessment conducted of their lands over a two year period.

The report which was compiled in partnership with the Amerindian Peoples Association (APA), Forest Peoples Program and the Rainforest Foundation US details findings from the 22 villages in the two sub-regions (1-2) in collaboration with the respective villages, satellites and communities.

It also highlights experiences of the indigenous villages and communities that are vital to inform ongoing efforts to streamline national policies on land, resource tenure and allocation, bringing them in line with international human rights commitments.

A team consisting of two representative of the APA Laura George and Michael Mc Garrell and several Toshaos’, a senior councillor and two researchers recently handed over copies of the report to Vice President and Minister of Indigenous Peoples’ Affairs Sydney Allicock, Minister within the Ministry Valerie Garrido-Lowe and Permanent Secretary Alfred King at the Ministry’s Thomas and Quamina Streets location.

Minister Allicock in commending the village leaders and support partners for taking the lead in compiling the information said “this document here is quite weighty. I love the caption Our Land Our Life and I can assure you I will read this because it is very exciting and let us support one another and I want to thank you so much for having such a document”.

A section of the gathering.

Among the main findings reported include, of the eighteen settlements visited fifteen had land titles, three communities are yet to acquire land titles, fourteen of the fifteen titled villages were demarcated, overlapping claims, pending applications for extensions, issues with mining and recommendations.

APA’s Michael Mc Garrell is adamant that “it will benefit the communities in that now they have a tool they can use for their advocacy, because many times there is no factual evidence where they can show something visual to explain their situation”.

In Chenapou for example, which has a population of approximately five hundred and twenty four with one hundred households, the findings revealed that the main livelihood for villagers is subsistence farming and most of the fertile farming grounds are located outside of the village title and between one day and a week away by foot.

Many of the areas are shared with neighbouring communities as they are part of the Patamona Territory.

Plans are on stream to get potable water to the respective homes. Among the villages resources include a nursery and primary school, a Health Center and Health Worker, a radio set, internet service and electricity from solar and privately owned generators.

Additionally, some 15 families will benefit from a $5 million budgetary allocation which will assist them in rebuilding homes which were completely destroyed during the heavy floods in May of last year.

During a village meeting back in February when Minister within the Ministry Valerie Garrido-Lowe met with residents, Village Toshao Edward Mc Garrell indicated that the monies will be spent on procuring nails, zinc sheets and other equipment needed for the rebuilding process.