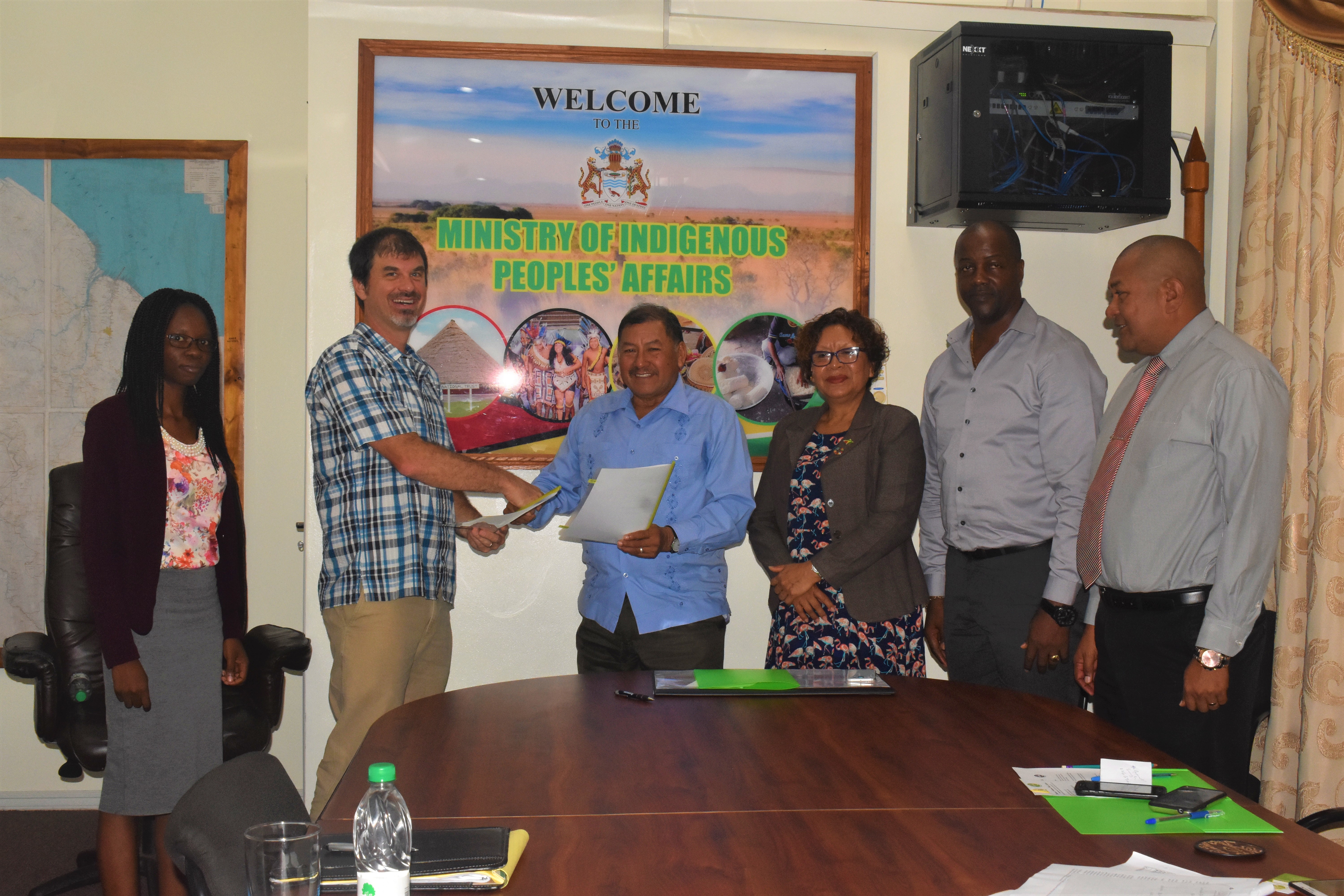 The Ministry of Indigenous Peoples’ Affairs (MoIPA) on Wednesday signed a collaboration Agreement with the Guyana Tourism Authority (GTA) which is aimed at aligning strategies to improve community owned and led tourism enterprises in receptive villages across the hinterland.

It will also see a framework and action plan developed to align budgeted resources, capacity building to scale up impact and prioritize receptive communities for development assistance.

The MOU was signed by Minister of Indigenous Peoples’ Affairs Sydney Allicock, Minister within the Ministry Valerie Garrido-Lowe and Director of the GTA Brian Mullis at the Ministry’s Thomas and Quamina Streets Head Office.

Before inking the agreement Minister Allicock said “the experience that we have had over the three and a half short years in Government is that we have to work in collaboration with the agencies that knows the business. We in the hinterland, is where beauty lies, where real life exits and in keeping with the green state development there is no better place than to engage truly the indigenous peoples of the hinterland”.

Ministers of indigenous Peoples’ Affairs before signing the agreement with the Guyana Tourism Authority.

The Minister added that he is very pleased with the positive direction community based tourism is moving in, particularly within the last year and the momentous signing of this agreement would ensure “human and financial resources that needs to be put together for maximum outcome of the resources that we have at hand. We have seen that going this route we’re help with our various expertise and in this case it is the GTA who are the experts in the delivery of the training, we have the communities and we have the ministry who could identify those communities that are ready for investment”.

Minister within the Ministry Valerie Garrido-Lowe emphasized MoIPA’s commitment to collaborating with other Agencies to ensure development through strategies beneficial to the respective villages since “to cater for the seventy eight thousand or eleven percent of the indigenous peoples in the hinterland community is quite a challenge for this Ministry alone…and that’s what I like with our APNU/AFC Government we collaborate with each other to see how we can really target communities in whatever we want to do that we can achieve that goal”.

“The hinterland has been a challenge a long time for various governments and it needed the political will to reach out to our people…and address their economic needs and that’s what we have been doing as it relates to the various projects. This is where the GTA comes in, how do we market our beautiful hinterland in the best way possible. Up to last week one of our HEYS facilitator accompanied GTA to Moraikobai where she trained the women there to cater and we have been experimenting using the cassava and farine so that when people travel to the hinterland they won’t be eating the same chowmin, cook-up but rather cassava made foods” the Minister related.

GTA’s Director Brian Mullis and other staff of the Ministry attending the signing.

Meanwhile, GTA’s Director Mullis noted that “community-led tourism is truly a unique phenomenon in Guyana, it exists in other places in the world, but not at the level or the market of success that we have achieved in Guyana through the leadership of the Ministry of Indigenous Peoples’ Affairs in communities like Suruma and Rewa and it has been the vision of MoIPA for some time to scale that up, how can we take efforts like Suruma that might have taken decades and turn that into several years to where the communities can be successful with tourism”.

Among the GTA’s responsibilities is to link visitor ready communities to the tourism value chain and Mullis said that “we want to leverage that past investment which has been significant in tourism in indigenous communities” in terms of domestic and international tour operators and wholesalers.

Among its other responsibilities are: completing a community-led tourism framework, an action plan and identify tools required to support implementation.

Other deliverables will see the Ministry and GTA develop a work plan, which will outline priorities which clearly identifies outputs, resources to be allocated and the parties responsible for implementation.

Between 2015 and 2018, Government has invested an estimated $30.4 million dollars towards improving community based tourism in ten villages across the hinterland, and in 2019, five additional villages will benefit from eleven million dollars respectively.