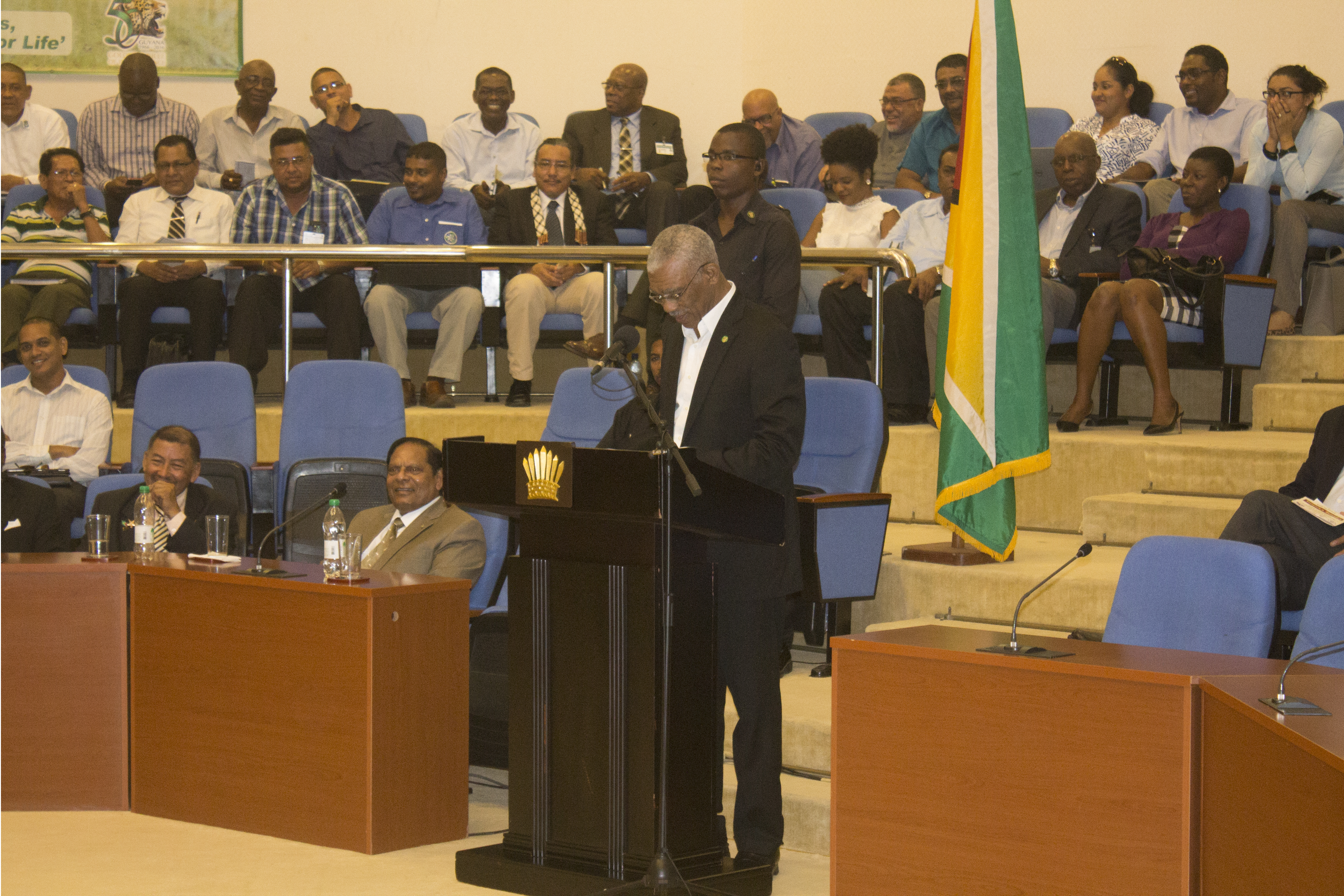 President David Granger has called on the Ministry of Indigenous Peoples Affairs to recommend measures for the establishment of a five-member committee aimed at effectively addressing the many challenges the indigenous population faces.

President Granger made this call during his address to the two hundred and twelve indigenous leaders and Community Development Officers who gathered at the Arthur Chung Conference Center for the 2016 National Toshao’s Conference.

The establishment of the committee according to His Excellency “respectively will not only report to this national assembly of Toshao’s but also implement the policies of the National Assembly to deal with the economy and the environment, to deal with social protection and safety, infrastructure, culture so I see this five-member member committee working under the Ministry of Indigenous Peoples Affairs to give support to the National Toshao’s Council to actually implement these decisions.”

Additionally, a key area highlighted by Chairman of the National Toshao’s Council Joel Fredericks during his presentation was the acquisition of land and a structure the NTC could call home as well as an increase in Monthly stipend for Toshao’s.

President Granger assured that these requests will be brought to the attention of his Cabinet.

Meanwhile, Vice President and Minister of Indigenous Peoples’ Affairs Sydney Allicock during his address to the indigenous leaders deemed the past year a resounding success.

“We have made steady progress with the implementation of the ten point plan as adumbrated by His Excellency President David Granger. The Hinterland Employment and Youth Service Scheme is up and running. Infrastructure works are ongoing courtesy of the ministries of Public Infrastructure and Communities and the Regional Administration in collaboration with Central Government…..we are discussing a significant agriculture project with IFAD which will benefit regions one and nine. We are pursuing an extension to the land Titling Project, we believe that the indigenous peoples’ land issues are critical to nation building,” Minister Allicock emphasized.

He said contrary to what some may believe “your government continues to offer significant support to the sustainable development drive of Indigenous Villages and Communities all across Guyana.”

The Minister sounded a warming to agents who are working to cause division within communities but assured the indigenous caucus that conquering this struggle “shall cause you to emerge triumphant in the very short term.”

The Minister concluded his remarks by reminding that “we each have a role to play in bringing the good life to all.”

Minister within the Ministry of Indigenous Peoples Affairs Valerie Garrido-Lowe pointed out that the instillation of the President David Granger led coalition Government brought with it Freedom which is being embraced.

“Last evening you all met with the opposition members of parliament and today you are here to discuss the way forward, that did not happen before 2015, sad to say but the fact is people were afraid to speak and to be seen with us when we were in opposition much less have a banquet with us like we were lepers or something… you were told that only the previous government had all the answers for you and that the opposition was something bad and many of you believed that but that is not so the opposition is an important arm of the legislature that works together with government…. so we welcome your discussions with the opposition they must understand all the issues of our first peoples because only then they will be able to support the many developmental plans that your government with your input will be implementing.”

The Minister also pointed out that in the history of the gathering of indigenous leaders, the NTC is in the forefront of planning and executing the successful hosting of the Conference, while some sixty five million dollars is being expended on the Conference, a ten million dollar increase from 2013.

The Minister also highlighted the success achieved over the past year as it relates to empowering the youth. In relation to the Hinterland Employment and Youth Service HEYS Program, the Minister said the youths particularly in region eight are capitalizing on the opportunities available. The women also according to her are leading the way and have assured that her Ministry will continue to provide the necessary support in this regard.

The second phase of the Youth Program which is currently in progress was rolled out in one hundred and six villages across the country approximately three months ago.

The opening ceremony was attended by Prime Minister Moses Nagamootoo, Speaker of the National Assembly Barton Scotland, Members of the Diplomatic Corps, Government Ministers and members of the opposition among other invited guests.

The gathering was treated to cultural presentations by Mainstay and Pakuri Culture Groups and Batavia’s Crystal Williams who sang “Essequibo Belongs to Me and Every Guyanese.”

The five-day Conference is being held under the theme: Guyana’s First Peoples, Preserving Our Culture and Land for Life.”

Tuesday’s session commences at 8 hours with the revision of the Amerindian Act being given precedence.