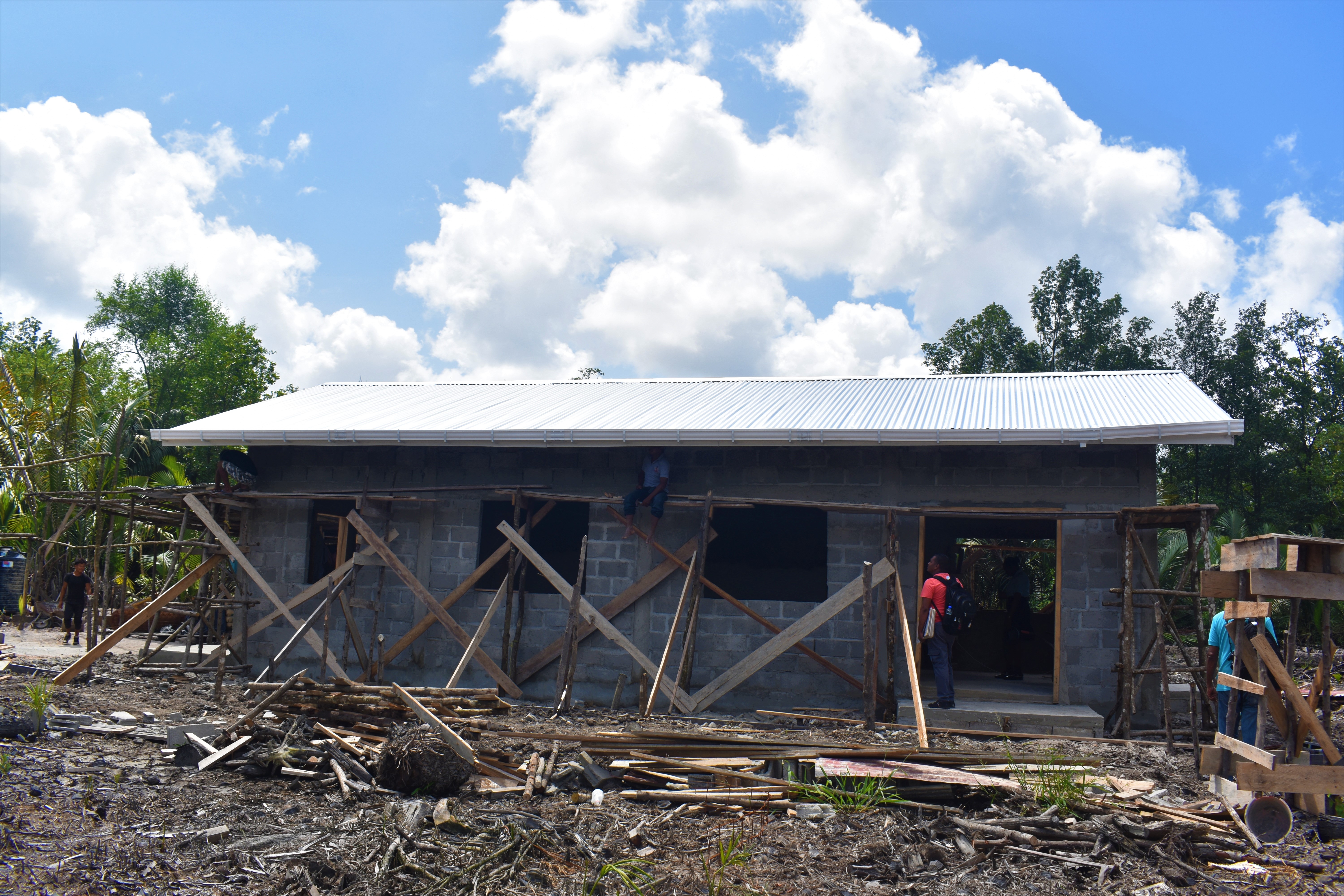 Residents of Smith Creek, Mabaruma Sub-district, Barima-Waini, Region 1, are eagerly awaiting the commissioning of the Fish and Crab Processing facility so that they can begin to benefit from market opportunities.

During a visit to the facility on Thursday by Minister within the Ministry of Indigenous Peoples’ Affairs, Valerie Garrido-Lowe, Augustine Lackan a resident related that villagers never could have envisaged such an economic project could have been established in their village.

“We never think this could happen and we just deh one way all the time because you know plenty times when people catch crab to sell in Kumaka the market is the problem, but now we gon bring our crab here and they gon buy it and the fish is the same so this is very good. It will be a benefit for us and even our children with their schooling”.

Several of the village’s men folk have already begun benefitting from the project since it would have created job opportunities. Villagers were paid to produce sawn lumber used on the facility, transporting sand and stones and other hardware as well as earned a daily income for working along with the skilled builder.

According to resident, Michael Williams, persons were also employed to construct a special dam around the facility to cater for the high tides since the water level would significantly rise during spring tide.

He explained that “the creek there that will pull out the water from the trench which we will control by this koker so the water can’t lodge here and it will go so, and here always keep dry”.

Jerry Bombury another villager who was a member of the land clearing team said, “this will be a real good help for me because I have children going to school and every day I have to get a lil money for them, their pencils you know so a job right here to ketch the crab and sell, so I can work and support them to get an education, so this will be a real help to me and my family”.

“For me I never think and never expect that we could have something like this here and at least I want to say thanks to Minister for being a real help you know, travelling from that place to this place here and for making us comfortable cause if she wasn’t there and to come here and see that we get something in our community we would have been the same without nothing”, Bombury related.

Reynold Santiago, another villager, and the sole bread winner for his home said, “we does ketch crab before and carry to Kumaka and sometimes crab don’t sell and we does bring back we crab and that’s the only thing we does depend on to sell and buy lil thing for the home and thing, so we thank God that they make this building and once it open and it go ahead because me does fishing at sea so I glad the place gon open in our village and if any going out now is just to come in and sell off. We deh couple years here and we nah know this thing could happen in we community, first we hear it in words and behind it we see the action and now the house put up”.

Bernard Bowering a father of eight said, “when this work open we will ketch crab and fish and sell and get we money and ration. My big children is twenty two and eighteen but I still mining them you got to say, so this will help me”.

Residents related that while they are currently hunting crabs, the season is approaching and they will be in abundance.

Numerous holes were visible in close proximity to the facility indicating the presence of crabs and according to residents, once the crab season sets in, crabs will be everywhere what in layman’s terms is referred to as “crab marching”.

For decades selling fish and crab was the main economic earner for the close to two hundred and fifty residents of Smith Creek, and today they can boast about a facility which will ensure they add value to their catch.

This facility will be supported by neighbouring villages of Morawhanna and Imbotero and during the initial stages of planning, Minister Garrido-Lowe said these economic projects of establishing small industries in villages as a source of income generations were in keeping with the Ministry’s objectives and the 2030 Sustainable development Goals.

Minister Garrido-Lowe, through the Ministry, has been able to successfully accomplish this undertaking and according to her, “The APNU+AFC Government is of the view that every Guyanese deserves to live a good life. President Granger has a Ten-Point plan for the hinterland and one of them is the “Hinterland Happy Household” and with this project every family will be able to earn. They will then be able to build better homes, furnish their homes and generally support their families like never before. The APNU+AFC Government is a Government for all our people, because we care.”

Meanwhile, villagers say they are committed to seeing this project to fruition and is looking forward to the support from all Guyanese once the product is available on the shelves of supermarkets across Guyana, similar to the Pakaraima Flavours and the Rupununi Essence.

The facility will be completed this month.

Similar economic projects are being executed in Kwebanna and Santa Rosa in Region 1, Paruima Region 7 and Paramakatoi and Monkey Mountain in Region 8.