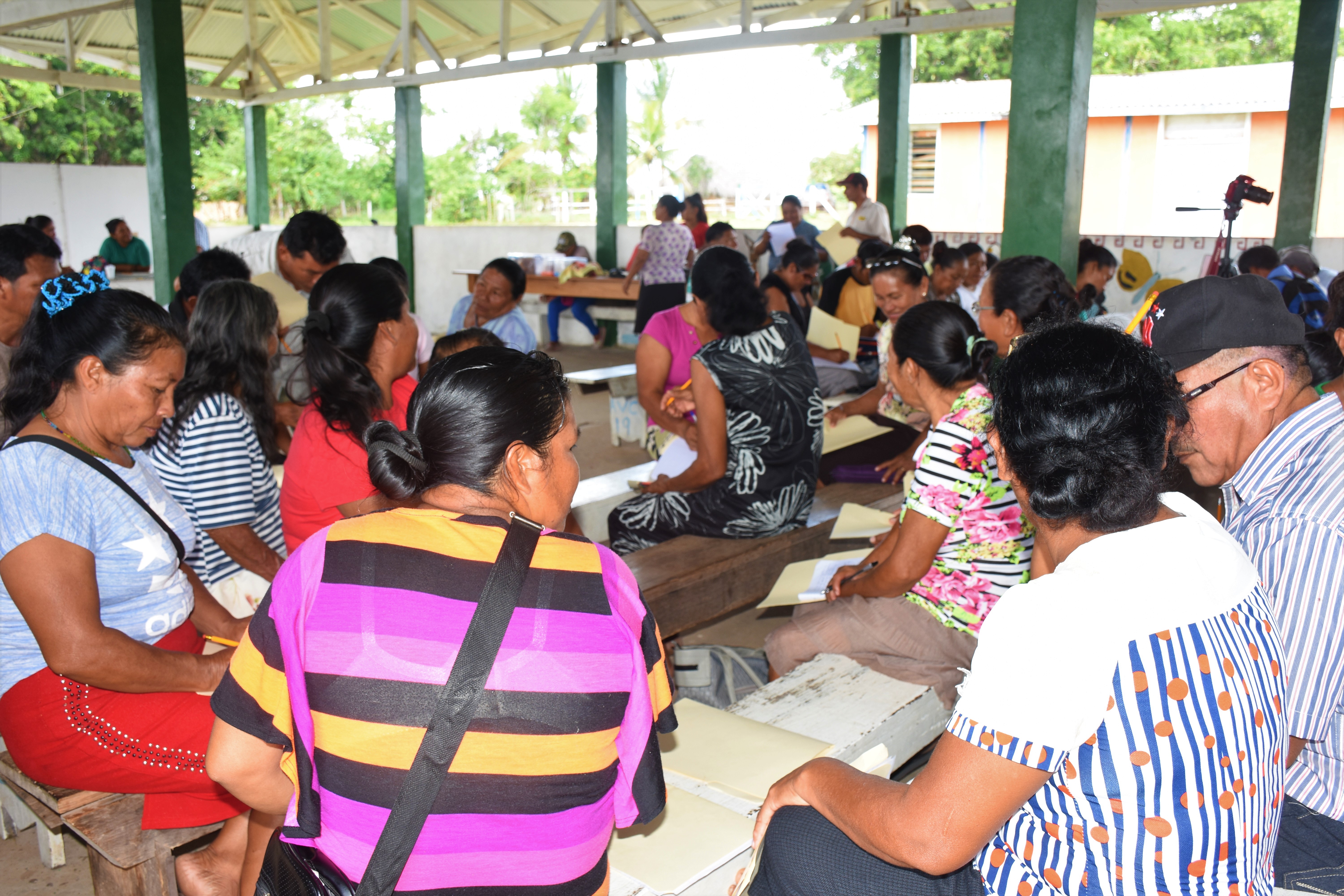 The Communications component of the Amerindian Land Titling (ALT) Project on Friday wrapped up a successful week of workshops in Aishalton, Muraranau, Awaraunau and Shea Villages in deep South Rupununi, Region 9.

Scores of residents attended the workshops from the respective villages where pertinent information was share on Demarcation and acquiring a Certification of Title, Application for an Extension and the Grievance Redress Mechanism (GRM).

The project which is executed by the Ministry of Indigenous Peoples’ Affairs in partnership with the United Nations Development Program saw a team comprising of Special Assistant to the Minister of Indigenous Peoples’ Affairs with responsibility for Community Development Martin Cheong, Communications Associate Tana Yussuff, Director of the GRM Orinthia Schmidt, Communications Officer in the Ministry Alethea Grant and driver Conrad George receiving positive feedback during the sessions.

When the ALT Project commenced in 2013, some sixty eight villages were earmarked  and Chung said while it remains crucial for indigenous livelihood, it was a bit ambitions since a number of villages that were included had outstanding issues to be addressed prior to 2013 “especially for the communities in the Upper Mazaruni, nothing can be done, they have already decided that they would not talk demarcation or anything relating to their lands until the court case that has been going on for nearly 21 years now gets a ruling so that in itself took away actually achieving the objectives form this project”.

Moving forward Cheong said “we have tweaked it over time and we have excluded them from the last phase of this project and we have now included six other communities particularly from the Rupununi area that have interest in extension”.

Communications Associate Tana Yussuff during her presentation, told scores of residents in Aishalton that “Amerindian Communities are the major stakeholders of this project so it’s necessary that we hold workshops like this in all sixty eight villages so that you can understand the process and all the issues and concerns you can raise at this meeting too”.

Following the conclusion of the workshop Immacaulata Casimero who is a vocal and active member of the village said “its something good for me where we are being educated on what is expected of us as community members…we have one goal and the goal is to ensure we have rights to our lands and full legal ownership to our lands so with this, it’s a way to move forward…so it’s something that is very good to me”.

Another resident Gavin Winter said “its informational in that we are able to hear what is required of communities to apply for title or extension and learning form this one here, there is something new that is being mentioned here to give us hope to getting our extension. I have learnt about the grievance mechanism which is the first time that we are hearing about this so this is a forum where we can bring our problems or issues which can help us get our extension”.

Keith James another resident said “it’s important to me and not only to me but to everybody who is living in Aishalton and I know it will be a long process but nevertheless we are here. I learnt a lot from it but we need to be educated more on this part here because we will understand more about it”.

“This is very good. I think these are the things we need in this village because time and time again we have been looked at as people without understanding because we were never educated in that manner and as I said, hearing these things now especially on our land because we are talking about our land title and everybody is getting to understand….and what happened this afternoon when I came I think I am more clear”, said Dennis Paul who intends to follow the process keenly.

Elizabeth Andrey said “yes we will benefit from it and if our Government pushes it a little more faster because we were children as yet and now we are adults and we are grands now and I’m happy that my mother is still alive and I’m sure, she would feel much happier to hear that we get through with our land extension so what you people did here is very interesting and it kinda open our thinking”.

Richard Kaitan, a resident and the Health Worker of Shea Village said “the workshop was very successful, I learnt a lot and I know the people od Shea Village learnt a lot too now they know how to report on problems or issues we have in the village example overlapping and them things at least the village understand how they would strike to that end”.

Mr. Bernard Ritchie a sixty six year old resident who has been actively involved in Shea’s Village lands said “the most important is that we are here together to say something to air our views towards this important meeting concerning our lands and I think it is very important for our young people who are now coming behind, they are the ones to say yea so that we would keep our lands as how it is”.

Land Ownership for the Indigenous Peoples remain the primary focus of the Ministry of Indigenous Peoples’ Affairs and Cheong reminded that “if you have followed the manifesto of the APNU/AFC Coalition Government one of the things we had promised is that we would deal with Amerindian land issues in a very definitive way. It’s the President’s desire to see all these communities land issues are addressed in a very comprehensive manner so that’s what we are trying to do and this is not only the President, but also our Vice President and Minister of Indigenous Peoples’ Affairs who himself is from Suruma and who understands the importance of land to indigenous communities”.

Meanwhile, villagers were given the opportunity to compose songs and perform poems that reflect the importance of land ownership which will ensure sustained livelihood.

Additionally, a technical team will be returning to the Region in the coming weeks to conduct an investigation visit in villages that requested extensions.