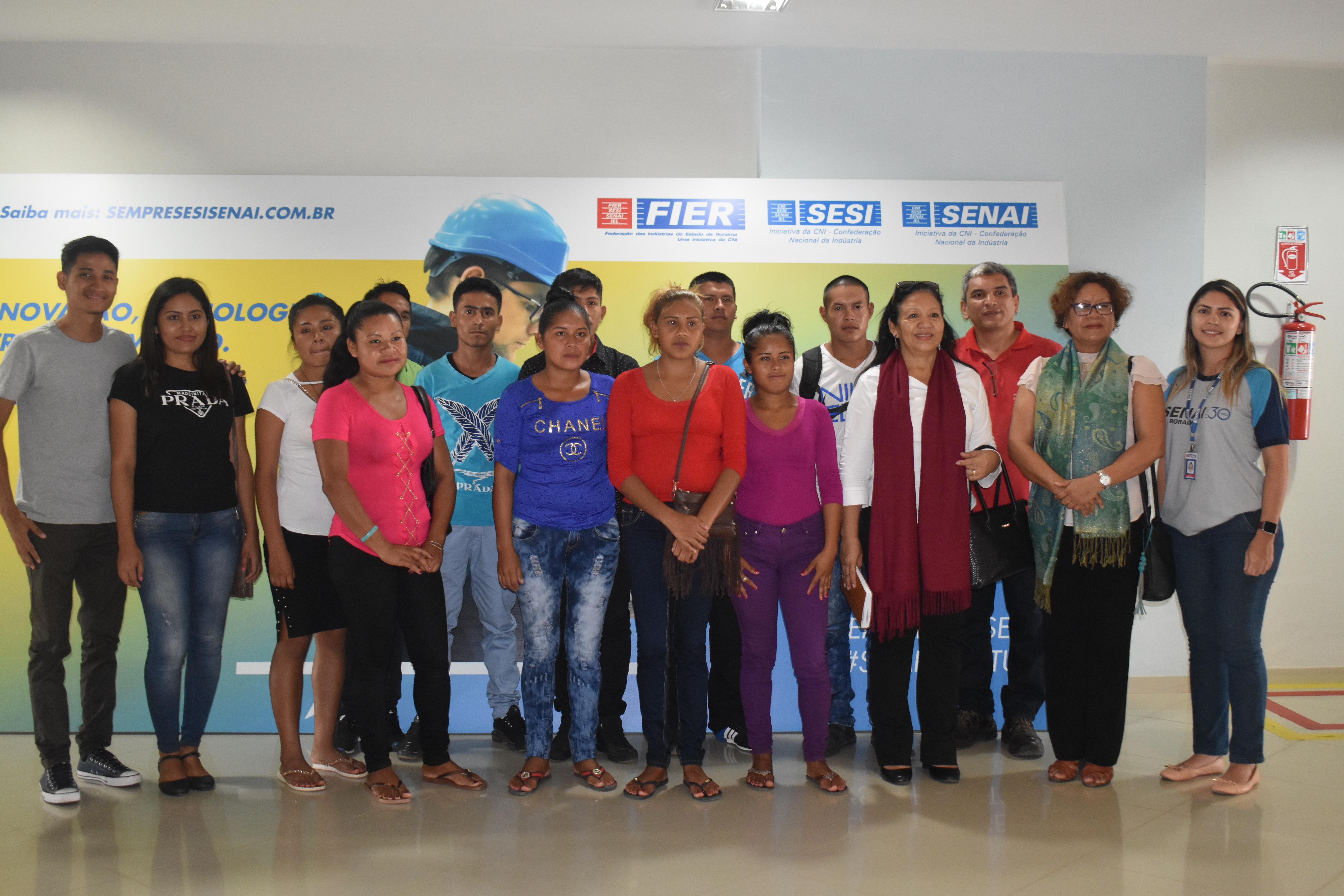 Ten anxious youth from Monkey Mountain in Region 8 on Wednesday embarked on a one month training in Boa Vista, Brazil for the much touted Lapidary project, the first of its kind in Guyana.

The youth, five males and five females made the journey to the neighbouring State of Roraima, Brazil, to commence the final stage of preparation at the SENAI, a highly recognized technical institution in Brazil, before putting on their white robes in their state of the art laboratory on home soil.

Addressing a brief yet historic moment prior to commencement of classes, Minister within the Ministry of Indigenous Peoples’ Affairs, Valerie Garrido-Lowe, who is the brain child behind this sustainable economic livelihood project, said the APNU+AFC Government has full confidence in the indigenous youth and is not afraid to invest in them.

“The APNU/AFC Government is not afraid to invest in our youths and our people, we want to give you the chance to empower yourselves by helping you acquire the necessary skills so that you can make money for yourselves. We want to establish green, sustainable, environmentally friendly industries in your villages that can generate income so that entire village can benefit. Your Government has placed its confidence in you, our youth, so you can grow and become what you want to be, so that you could get an opportunity to achieve your dreams. We are doing this because we care… we have a President who cares” the Minister categorically emphasized.

The Minister said since ascension to office in 2015, the APNU/AFC Government begun to place special emphasis on hinterland development, particularly on the youth, in an effort to ensuring they become less dependent on handouts as was the custom.

Minister Garrido-Lowe, in thanking SENAI for its willingness to partner with the Government of Guyana on this life changing initiative, is confident this partnership would bear deep yielding roots.

Consul General for Guyana in Roraima and other Northern States of Brazil, Mrs. Shirley Melville, noted that in 2018, Guyana and Brazil celebrated 50 years of bilateral relations and remains confident this will continue for many more decades to come.

In thanking SENAI for making the course a reality Mrs. Melville stated that “we appreciate this very much and with this very big project in front of you, it has to be successful. It must be all about team work, and you have to realize also that it reflects very well on behalf of SENAI. So together we will make this a very successful project”.

Speaking through an interpreter Director of Professional Education CFP, SENAI Jamili Vasconselos, encouraged the youth to capitalize on acquiring all the knowledge possible during the duration of the course, while also taking the opportunity to learn more about what the Institution has to offer. She said SENAI’s doors remain open for future pursuits.

Following the first day of training, Joanase Stanislaus said “it was real good, the impossible became possible. When we started classes it was like how do we begin our work and by listening to the teacher we were able to know what to do with the equipment and how to use it. We learn how to use the Paquimetro (caliper) to measure the size of the stones. I experience something that I never did before and it was good to know about it and I want to thank Minister for her hard work and I promise that I won’t let her down”.

Vanessa Stanislaus said, “I enjoyed the first day after learning about using the equipment and measurements and also the tour we had of the place and when I go back home I will put whatever I learn to practice”.

Another student Samuel King said, “When we started the training we see something we didn’t expect to see when we had the tour. The lesson was really good we learnt a lot of things yesterday like how there are plenty precious stones, and diamond that we think was the highest one was at number seven and two or three of the precious stones are found in Guyana and in my region. I am now exposed to a lot of things and I am thankful for this great opportunity and we would make the best of it”.

Team leader and Village Councillor Dexter Stanislaus noted that, “The first day was good we had a tour which was good for all of us. The class was also good and we learnt how to measure the stones and we had to compare our measurement with the others to see if we were doing it right so that was a good experience. This for me it is really, I don’t really know how to explain it but Minister Lowe and the Government made this possible and I am really, really happy”.

Evelyn Peters, “Yesterday was very good we learn about measurement which I never know about and I would like to learn more about it and when I get back to my village I will share what I have learn. I also want to say that no other Minister never think about helping us like this before and I feel glad about it”.

Natasha King who also speak a fair amount of Portuguese said, “It was good, the work, the tour was very good, we learnt many different things, and is anxious to go back to Monkey Mountain to start this project. She did a great job for us”.

Meanwhile, the state of the art lapidary facility, once operable, will produce jewellery, ornaments and exotic pieces of furniture using semi-precious stones which can be found in abundance on the plains of the Pakaraimas.

This project is also intended to promote the village’s tourism prospects with an additional component added where tourists will be afforded the opportunity of participating in a “semi-precious stone hunting expedition”. This will allow them the opportunity of choosing their own piece of semi-precious stone and their own designs which will be produced to order back at the lab.

Kato, Kurukubaru, Maikwak and Tuseneng are on board with the project and will be supplying semi-precious stones to the Monkey Mountain Lapidary, among them crystals, amethyst, volcanic, jasper and agate gemstones, adding value to the product.

Monkey Mountain, or the village’s traditional name, “Wandike” is home to more than one thousand residents and is nestled beautifully in the North Pakaraima Mountain Range and lies seventeen hundred feet above sea level.

Its main economic activity is subsistence farming, hunting and fishing.