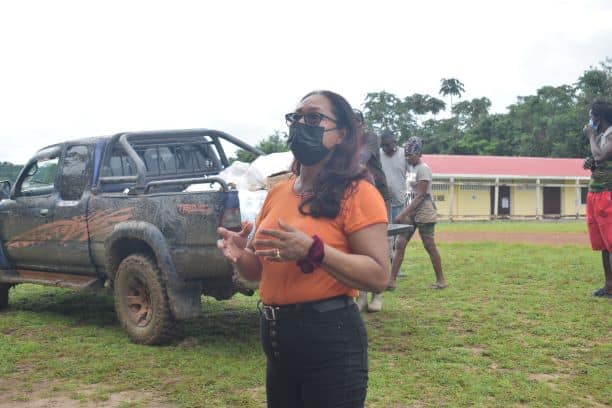 ….residents barred from ease of entry and exit

Following a meeting with the Regional Democratic Council officials in Region Eight, Minister of Amerindian Affairs, Hon. Pauline Sukhai and Team on Tuesday traveled to El Paso Village, Tumatumari District, Region Eight to meet with and distribute relief supplies to flood-affected residents in the community.

residents directly affected by the high waters and cannot access goods and services were visited by Minister Sukhai.

Mr. Raphiel Roberts Davis and his wife, Roylyn Allicock, were among the residents who had to evacuate their homes after drenched by floodwaters.

Mr. Davis shared the difficulty in traveling from one location to the next, due to increased fuel prices.

“I think the biggest problem the community is facing right now is traveling from point A to point B, it’s not easy. Kerosene oil, big issue, gasoline to travel big issue”, Mr. Davis said.

Great losses were suffered by Ms. Marva Jules after her home was almost entirely submerged by the high waters.

Ms. Jules lived with her two grandchildren and has been residing in the community for over 31 years. “Well I lost alot of clothes, you can’t get to pull up everything so certain things were left in the water.”

she added “They had to rip off the roof to get the things out”.

Nevertheless, the residents expressed gratitude for the relief supplies given to them and thanked Minister Sukhai for visiting and attending to their needs and concerns despite the difficulties faced to get into the community.

Minister Sukhai in remarks to the residents reassured that the Government is strongly committed to continuous support to El Paso like other flood-affected areas.

“Our government is focusing firstly on ensuring that the people are safe out of the water. There will be food supplies and at the same time we are tying in health issues that could arise”, Minister noted.

Meanwhile, residents were encouraged not to travel due to the difficulty and high cost of accessing goods and services.

Minister Sukhai said, “like all the other teams across the country addressing and making responses to those who are affected by the flood, we are here with you.”

“We know that not all of you, your homes are not underwater but the situation exists that you are cut off basically from ease of entry and exit from here to the main road and to areas where you can acquire goods and services, we are hopeful that when the water goes down your road is not that destroyed…If you cannot travel, we ask persons to move to higher grounds and the Government will respond”.

The village’s leadership was urged to work closely with the regional body and Ministry, should any other challenges arise.

“We may not be able to come back in the shortest possible time but we would ask again (Miss Jennett and her team) to ensure that she works closely with the region and the Ministry…if there is any issue, any challenges that arise after we left you guys can call upon those to bring further support and to assist you”, Minister stated.

An assessment report will be prepared as the water recedes to have more detailed information on the extent of damage caused to the community’s infrastructure (roads), crops, and homes. As such, support to offset expenses to return to a normal livelihood will be given.