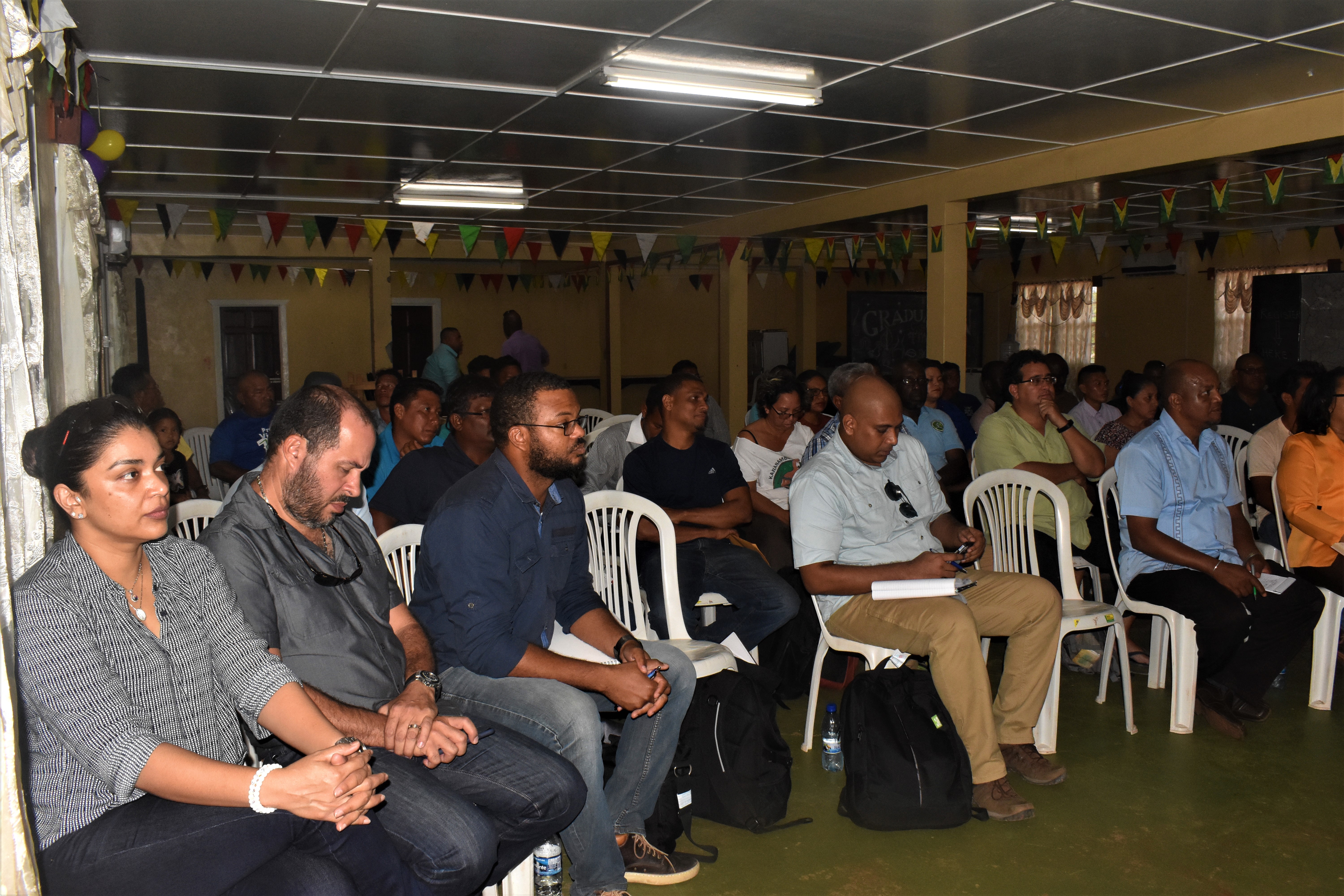 A working group for the all-weather road connectivity between Nappi and its satellites and Yupukari and its satellites in Upper Takutu-Upper Essequibo, Region 9 was formed during the second round of consultations with key stakeholders at the Amerindian Hostel in Lethem on Monday.

The Group is scheduled to meet this coming weekend (Saturday & Sunday) to agree on and finalize the route so work can commence from Nappi to Yupukari can commence.

Minister Allicock during Monday’s consultations stressed the importance of cooperation among stakeholders since access to alternative roads can lend to a range of benefits for residents.

The Minister said “we have been supporting villages to have cottage industries, create products, do agriculture, it is for your own good, for the economic growth of your community so you need proper infrastructure in place, roads, bridges, drains”.

Minister Trotman who continues to fully support this project noted that there should be immediate movement with such an investment and added that “things need to get done we could end up talking about this for another five years or ten years, so I am committed to working with not just Vice President Allicock, but his brother Chairman Allicock, Toshao’s, Councillors and all of you to get this project done. Let us not wait another three or four years something may happen, the will may pass, so let’s get it done”.

Additionally, Minister Trotman also noted that “when I go back, I am going to work on the Linden to Kurupukari aspect because I know from Annai to Lethem is relatively good and we are looking at a contract to raise that to about eight feet, putting in some more culverts and we will do the best we can”.

Adding his voice to the conversation Regional Chairman Brian Allicock commended the Government for “explaining to its people who are going to benefit from such an activity, for them to know how, when and whose doing it. So consultations are necessary and you heard from the chair that the people were happy”.

Councillor of Toka Village Eugene Isaacs stated that “I don’t think we have much problem there because I was trying to push a road through to Kwaimatta which was reasonable successful, we didn’t have a scraper and we were able to lift that road and make it almost accessible throughout the rainy season except the part that wasn’t completed and that is to show that with a little more lifting and with some gravel, definitely, a road can go through there at a cheaper cost”.

The Chief said “we as indigenous peoples in the past have never had the opportunity to really have an input into developments like these and this shows that Government and Indigenous people can work together and especially at the national level as the chairman this is what we want to see across the country”.

Nappi’s Toshao Guy Fredericks said “this is how we should move forward, this is the way forward, involving the people. When I was coming down the road a while ago in a mini-bus I thought I was travelling to Boa Vista, and on one emergency night a bus reach from Parishara to the Hospital (Lethem) in fifteen minutes so imaging when the road is fixed, when it’s completed we need to celebrate”.

Karanambo’s Melanie Mc Turk who has in the past publicly vented her disapproval of the proposed road network seems to have now changed her position.

Mc Turk explained that “the 3-mile bush is our critical area, which is the largest bush in the entire Rupununi. When we talk about jaguar, agouti, capybara, the giant ant eater all of those of which our Tourism is dependent on, our food supply this area is a refuge and a regeneration point for those species”.

Engineer in the Ministry of Natural Resources Gregory Williams who holds two Master Degrees (Hydraulic Engineering and Bio-Systems Engineering) explained that the aim is not to just undertake the construction of the roads, but to also protect the natural habitat, the aesthetic, agriculture and more so avoiding encroaching on villages.

Guyana Geology and Mines Commission is funding the project with a budget of approximately $200M dollars.