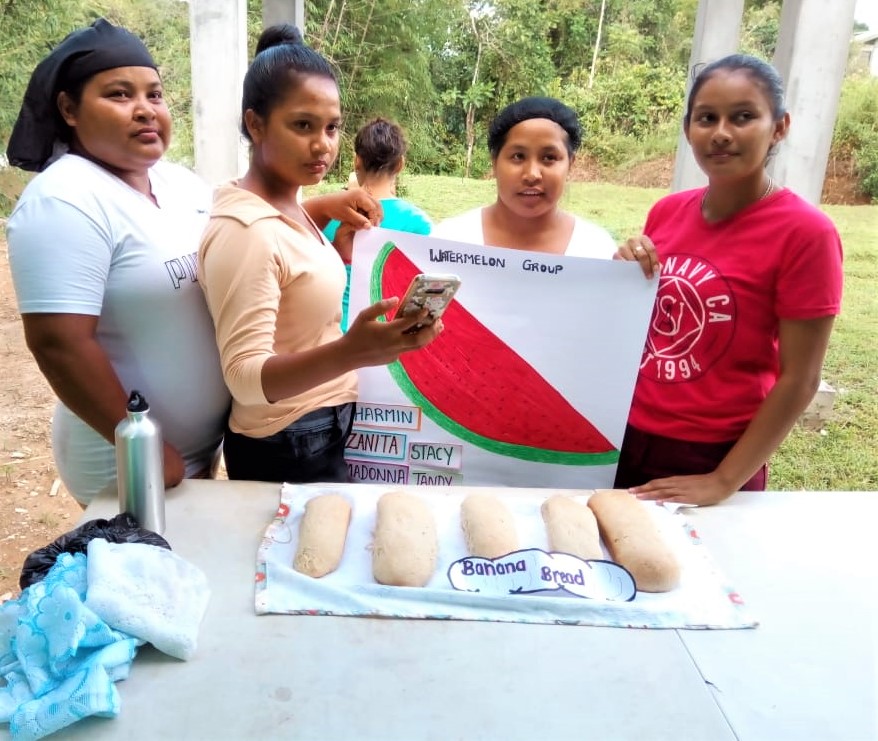 The Farmers Group along with the Hand-in-Hand Women’s Group in Kwebanna Village, Moruca sub-region, Barima/Waini, Region One, successfully concluded a one week training in preparation to host the first ever Cassava Festival scheduled for December 14.

The training targeted members of the two groups in order to creatively experiment with the Cassava Flour before the commissioning of the much-anticipated Cassava Flour Processing Facility.

It will ensure the standardized amount of ingredients (mixture) are obtained in preparing several delicious foods to meet local and international standards.

Chairperson of the Women’s Group, Barbara Peters, after the training said, “We had a real good time, we had fifty persons from Monday to Friday because you know we getting ready for the festival on December 14.”

Expressing great excitement, Peters said, “We had things made out of the cassava flour and the cassava meal and the cassava starch. We made starch custard, starch pie, starch muffin, seasoned plantain coated with starch, cassava fruit cake, cassava ginger/cheese sticks, cassava puff, seasoned cassava, cassava surprise, quenchers; so the training was very successful and I’m happy that the turnout was good.”

Participant Leandra France said, “I was in the Golden Apple Group because they put us in six groups and it was exciting, very interesting and I learnt a lot of things with the cassava flour. It will help us to prepare not only for the local people but for people who will be visiting our community in the future.”

Lorna Wilson from the Pineapple Group said, “I can tell you we had a very wonderful time with our teacher using the cassava flour and we had a sale at the end and most of the group had sold out. So now we waiting on the Cassava Festival and we had to put our hand in a bag and pull out a piece of paper and we will be making that for the festival.”

Speaking about the knowledge imparted by Ms. Cornette, Wilson said, “We really appreciate her and every moment spent with her, we don’t want to lose her.”

Fabian France who is the Chairman of the Cassava Flour Processing Facility noted that, “the training was good and it would benefit the ladies, it will also benefit all the nearby villages Manawarin, Santa Cruz, Warapoka they will all benefit big time.”

Cornette who spent the entire week working along with the women said, “I am very excited for the ladies; it was very interesting and motivational and they worked among themselves and it was good to see maximum participation”.

Meanwhile, Minister within the Minister Valerie Garrido-Lowe said, “The farmers are enthusiastic about the cassava flour and wheat flour mixture and we want to ensure the correct mixture that would make excellent bread, cakes and pastries, will be packaged and marketed.”

It was also noted that new and delicious recipes were created and will be unveiled during the commissioning of the facility.

Some thirty farmers are currently planting cassava to supply to the facility and during the launch of the project in March 2018, Minister Garrido-Lowe had indicated that “many of us plant cassava but how many of us earn properly from it? So it is time that we balance it off, we have to get our cassava out there and on the market and get paid for it.”

During the launch, Toshao of the village Paul Pierre noted that “in Kwebanna we have had our fair share of development happening; we have had tremendous support from the government so far and at this point we would like to thank Minister Lowe, the Government and the Ministry for doing what is best in the interest of us here”.

Additionally, the one-day Cassava Festival seeks to further highlight the great potential of Kwebanna and according to organizers, patrons will enjoy several delicious dishes prepared from by-products of the cassava. Booths will be set up where local foods, drinks and craft will be on display, in addition to several sporting events among them football, cricket and volleyball.